As all of the RV world knows, we lost our fresh water tank driving "The Great River Road" somewhere in Iowa. 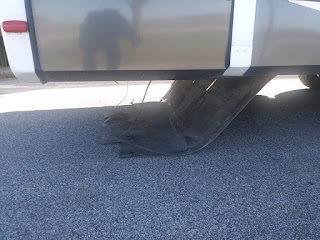 It just bounced right out from under our fifthwheel. We didn't hear or see anything, so who knows where it fell out. Looking back at the time, it looked like it would be a major undertaking to get it fixed. Fixed by a professional. So we cancelled our trip. Called some friends in Texas looking for recommendations and a place to stay. They said we could stay with them and they knew of a place to get it fixed.
Our friends let us move into their huge shop and they had full hookups in there so that was nice. We talked to the RV maintenance shop and ordered a tank. However, they were a month out for the repair but knew of another tech who could get to it in 2 weeks. The same amount of time it would take to get the tank. Well we are at their mercy and we will have to make the best of it.

The tank came in, so we picked it up and brought it to Camp Kephart so that the tech could just work on it in his shop. 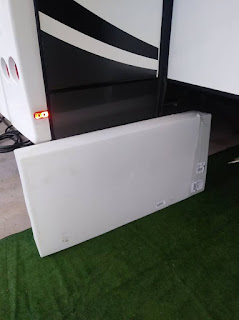 Easy peasy. We called the tech and told him the tank was here but now he was busy and couldn't get to us until Nov. 26th. Again at their mercy and more time to kill. Mike and I were looking under there and the thought occurred to us that we could do this. If not the tech could always finish where we left off. 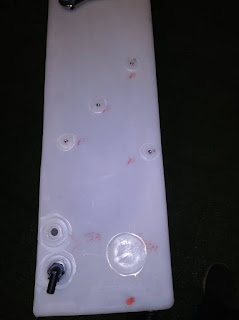 We needed to get fittings for the overflow and the inlet. A google search said that we were missing a wiring harness for the sensors.  I found one of those in town and a quick trip to Lowes and then we had things prepped. To be honest, it was about 10 trips to Lowes. 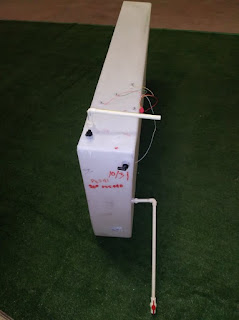 Next we cut the plywood to support the tank and made sure that fit in the space. 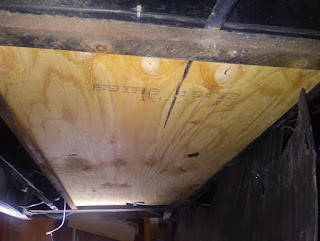 Then we laid the tank on the plywood and with the both of us we jockeyed the tank and plywood into position. Snug as a bug in a rug. Now to start hooking things back up. Mike had the water fittings and the special tool needed to attach those. 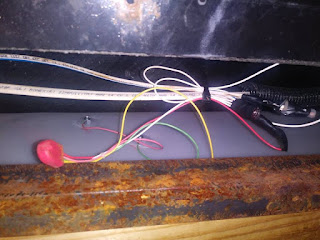 I wired up the sensors. 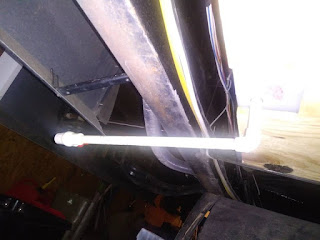 Glued all of the fittings into place. I added an extension and a ball valve to make draining the tank so much easier. No more climbing under there to remove the original screw cap. Once everything was in place it was time to re-enforce everything so that it won't happen again. 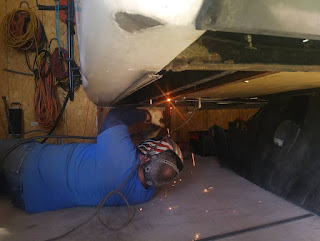 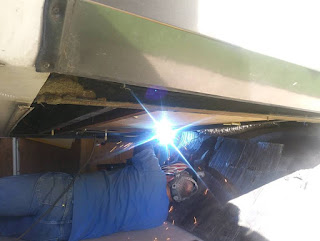 Mike welding new supports across the bottom of the tank. The original design didn't have those so we are making it better. 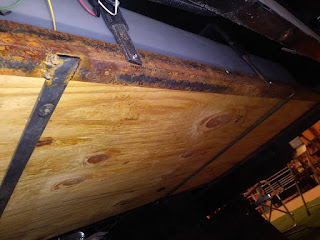 We also added brackets up over the top to keep it in place. Once that was done we filled it and leak checked it and made sure the sensors worked. Everything worked great. Now replacing the underbelly. Mike knew a guy who made signs and we got a 4X8 sheet of that black corrugated plastic. I cut off most of the damaged underbelly. 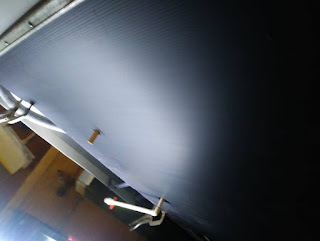 It is starting to take shape. 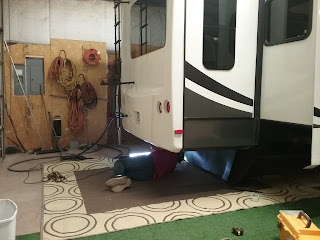 I was under the rig in Minnesota and noticed some of the underbelly coming loose. So I was re-enforcing the old parts and installing the new. 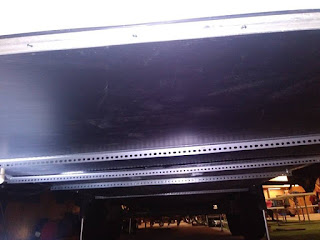 I added flat strap along both sides to hold up the underbelly and then put changle iron across to keep it from sagging. Again, better than the original. All in all it was easier than I thought it would be and it required many hours on my back looking up, so it was a pain in the neck. I also want to thank Mike and Robin for letting us be in your shop. It was so much easier having access to so many tools. Since it has been inside I have also done the wheel bearings. 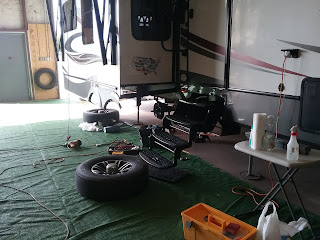 Also the last bit of damage to our side when we had a tire blow out 2 years ago. 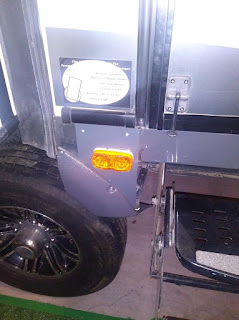 To say the least, it has been a very busy time and a very productive time for us. Less than two weeks until the Polar Express starts.

Posted by MNdrifters at 8:59 AM