Death March or Trail of Tears?

Much discussion has gone on in our household lately. The controversy is this. Our morning walks. I have affectionately called them "Death Marches". Our discussion is that I must not be doing it right because I don't die on these marches. So how can it really be a death march then. So I then offered this point. What if we called it the "Trail of Tears"? Because everytime she mentions our walk, it makes me want to cry. And before anyone sends me a complaint from the native American community, I am 35 % Native American. So put that in your peace pipe and smoke it.

Lately we have been getting an upper body workout. We have been noticing that our RV looks faded from the sun. It started last winter when we had moved down to Debary, Florida after Lisa's father passed away and we had put our camper into outside storage. The Florida sun and salt air was not good to it. We had always said that we would hire an RV detailer to wash and wax and detail it for us.

So with some free time between the RV show and the State Fair Lisa checked into it. One place Lisa called and got a quote of $20.00 a linear foot. We have a 40 foot fifthwheel. So if my old fashioned math is correct that makes it $800.00. Ouch. We would have paid $300-$400, but not that. Lisa remembers that fellow RV'er and blogger Jim Belisle had used a Meguiar's wax and he detailed his three step process for taking care of his RV. However we must be lazier than him and only did a 2 step process.

We decided to do it ourselves. $800 dollars is $800 dollars, right. We can definitely do it for less. Off to our goto store for supplies, Wally World. Plenty of Wal-martians but no wax. Jim said that West Marine  should have it so we googled it and drove into Tampa to find it. Bingo! $40.00 for the One Step Compound to take care of our oxidation problem. Now back to Wally World for cotton cloths to apply the polish and microfiber towels to buff it. 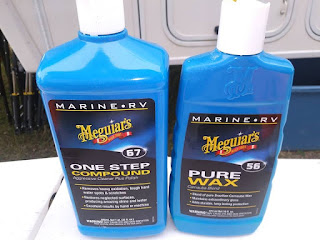 Now the One Step Compound is like a rubbing compound. It has a little grit to it and it takes a little elbow grease to apply it and buff it off. The directions say not to let it dry on the RV so we had to work fast and in small areas. 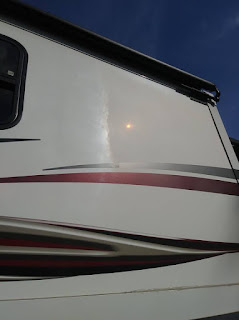 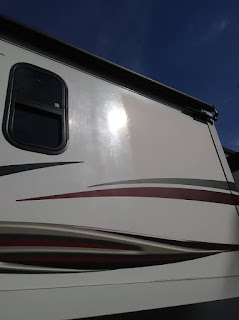 You can really see the difference between what we polished and what we hadn't. We knew it was getting bad but not that bad. What a difference. Two and a half days later we finished the entire camper. It looks great, like we had just bought it. It was recommended that we wax over it to keep it that way. Back to Wally World to look for the wax. Strike one. Let's try General RV since there are so many RV dealers in this area. Strike two. Lazy Days then just down the road. Strike three. Well we know where we got the compound so I guess we will drive back into Tampa and go to West Marine again before there is a strike four. $28.00 dollars for the wax.

Our arms and backs are tired by this point but we have to do it. Even my feet hurt from standing on the top of the ladder. We start the wax process and it goes a lot easier than the rubbing compound because you don't have to scrub as hard. Just waxy on and waxy off. 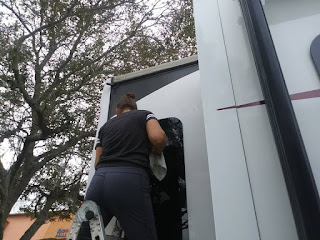 Lisa getting her back into it. So another 2 days waxing and Presto! We are done.

Now I can see why they charge $20.00 a foot. But it was satisfying to have it done and knowing that we did it ourselves. Now to keep it that way. The guy at West Marine said that it should be waxed twice but that we can wait a few months to do it and also use a cheaper wax.

So for less than $100 dollars for supplies and about 40 hours of labor we finished the job.