This morning I started life as an ant and went home a Zombie.

If you have been following our blog you know where we are and who we work for. That way I don't have to mention it because we signed a confidentiality agreement. And I don't want to violate that because I don't know if I could find another job as good. (In Campbellsville, Ky. anyways.)

With that being said I would like to discuss this new life as an ant. Do you remember as a kid looking at an ant hill and watching them going in and out non-stop. Trying, oh so hard not to grab that magnifying glass and start  burning the little suckers. But then doing it any way when no one was looking.  Or on the 4th of July, sticking firecrackers in the opening and lighting them. KKKKAAAAAA-BBBBBOOOOOMMM!!! Ants everywhere. Well that's not the kind of ant life I am talking about. Shame on you.

The ant hill I am talking about is the warehouse. Nearly 2 thousand people(ants) are moving about doing many different jobs just like in an ant colony. We are all walking these pre-determined paths, going back and forth. Do you remember looking at a profile picture of an ant hill? Just another similarity because the warehouse is 4 stories tall. Going up and down, back and forth for 10 hours. So that is what the ant reference is for.

Now we work 10 hour days walking in a giant warehouse pulling orders all day long. Walking 10-15 miles a day. Walking and trudging and trudging and walking. After hours and hours of doing that you start to notice changes in everybody. The "Good Mornings" are gone, the smiles are gone and also the "how are yous" are gone. In the south it is "how are y'all?". Before you know it the ants are gone and now you think you are in an episode of The Walking Dead. Zombiefied. Just moving to the next location you have to go to. Watching the clock tick by ever so slowly.

All in all it isn't that bad. It is hard work. We don't want to kid our selves and say it isn't. But anybody can do it if they have the right mind set. Our mind set is: we know that this is only for a couple of months, we can do it.

Now I want to share something from a person that is working behind the scenes. If you are reading out loud to children, you may want to stop now.

Honestly I did not know that Amazon sold so many adult novelties(use your imagination). I thought you had to go to other adult websites for that, but we are picking items of adult nature all day long. Most are wrapped in plastic. You see the items and you know what it is. Also the names give them away. So if you are the type that orders that stuff, don't worry because we don't know who orders what.

For instance if someone where to order a foot long purple wiggler(again, use your imagination). The computer just sends use to a location to pick one. We put it in a tote and send it on the conveyor to packing. The people in packing throw it in a box with an invoice with no names on it and pack it and seal it. Then the box goes to another station and the computer slams a label on it. Everything is completely confidential. Only the computer knows. At the end of the day Lisa and I always say, "You should have seen what I picked"? And then we go on the company's website to look them up. We are easily entertained.

Till the next time.
Posted by MNdrifters at 3:56 PM 13 comments:

What do you do in the Bourbon Capital of the world?

We heard that there is a Bourbon festival up in Bardstown KY. Sounded fun so we took the hour drive north to check it out. Bardstown is an old town. They have a historic downtown area that is quite quaint. And like many older towns, the streets are narrow and crowded with too much traffic for our gi-normous Dodge daully pick-up. We found a nice side street, parked and walked the historic district to the visitor center.

Now the festival is only a night thing, so we were there at 10 a.m. They have craft booths, food trucks and live bands beginning at 4 so we had to occupy our time till then. Bardstown is the Bourbon capital of the world, so they say.  There are 6 distilleries within a 20 mile radius of the town. Never having been to a distillery before we decided to pick one out and take a tour. Plus most have tastings after the tours also. Win, win if you ask me.

Not knowing anything about it but it is rated the number one tour on Trip Advisor. On our way out we passed another distillery. It was huge. It was Heaven Hill Distillery.
These Ricket houses hold all the whiskey barrels as they age. They have to age at least 2 years to be called Bourbon. Most will age them for at least 4 years to get a better quality of Bourbon. The Ricket houses at Heaven Hill are 7 stories tall. They are huge. Holding thousands of barrels in them. These distilleries make Bourbon for many different labels. You may not know Heaven Hill but you may have heard of Evan Williams, their most popular label.

Willet distillery is just as old as the others but it is very small compared to them. I think they produce 5 thousand barrels. Jim Beam is 20,000 in one ricket house. They specialize in small batch or single barrel rare selections.
The fermenting vats.
The distiller. I forgot the actual name to it.
The ricket house with Bourbon barrels packed inside. It smells of the Bourbon just wafting through the entire place.
The smell is what they call the Angel's share of the Bourbon. Because it is the evaporation of the Bourbon from inside of the barrels. They naturally loose up to about 40% due to evaporation over the 4 years of aging. So Willets is trying an experiment. They had some Virginia hams inside one Ricket house to see if they would take on the Bourbon flavor. I hope it works because that sounds amazing.
After the tour we got our tasting. We have decided that we are not Bourbon drinkers. It is definately whiskey. The first sample we got burned like your chest was on fire. The second one I chose was much smoother. I kind of liked that one. I think it was called Kentucky Vintage. I would also like to thank Willet because they asked if either of us were military. I said I was retired. They thanked me for my service and gave Lisa and I complimentary tours. That was so nice of them.

We still had time to kill so we went over to the Bourbon heritage museum at Heaven Hill distillery. We decided not to do any more tours because the process is all the same.

We then took the short drive over to the big kid on the block. Jim Beam distillery.
Their Ricket houses where huge. Just like the company I suppose.
It was time to get back to Bardstown and check out the festival. Lots of Bourbon related crafts. If you want an original Bourbon barrel or just parts of a barrel come here to get one. They can only use the barrels once to make bourbon. So they are barrel parts all over the place. The barrel tops with the names of the distilleries were very popular. If I had a place in the camper for one I would have picked one up. They were neat.The food looked good but it was to early to eat.

Well that is our Bourbon day. Lots of interesting facts learned today and fun was had by all.

A little sightseeing and a picnic

We had a long 4 day weekend here because of the construction going on at Amazon. So we did a little bit of sightseeing.

We drove out to the Green River state park to check it out. It is very nice out there. It is one of the campgrounds that Amazon contracts with if you wanted to camp there and work for Amazon. The downside of that though is there is no full hook ups. You have to wait for the honey wagon to come and pump your tanks or move to the dump station weekly. We will have to go back there and do some kayaking.

Then we drove over to the Army Corps. of engineers visitor center. The Green river is a dam project to help prevent flooding on the Green river. There are a lot of Dams on rivers in this part of the country. We stayed at one on the Nolin river two weeks ago and kayaked on that river.

Then today (Saturday) was the Amazon Company picnic. Good food, entertainment and lots of activities. They had carnival games and carnival acts. A band, and tons of food and door prizes. Lisa actually won a $100.00 gift card from Amazon of all places. :-) 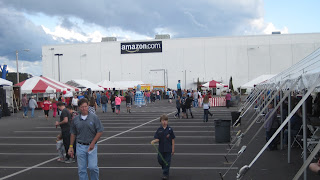 Well making the best of it. 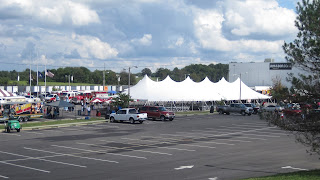 Floating down the Amazon in a paper canoe.

We are here and committed to exploring the Amazon. When we got here we were staying at the Green River Resort. It is a camp ground affiiliated with Amazon. But when we got there they are still full of their seasonal campers who just come in for the weekends, party all night and what not. Well  we get up at 5 a.m. to go to work and go to bed at 9 p.m.

So we moved over to the Heartland campground. It is within walking distance of Amazon and it is pretty much just filled with people working at Amazon. So we are all in the same boat. Working and resting.

We just finished our first 40 hour week. We work four 10 hour days and in the near future when things get really busy we will work five 10 hour days. The work isn't all that hard once you get the hang of the job. We are pickers. We roam the warehouse (2 million square foot warehouse) picking to fill orders. We are on our feet non-stop moving about in this giant facility. Inside there are four floors of merchandise so you get a lot of exersize. I have lost 9 pounds already on what we call the Amazon workout.

Now when we started we where a little nervous because of the newness of everything. And walking into this huge warehouse not knowing where you are going was a little daunting. But after getting lost once or twice in there you figure it out and you know where you are going pretty fast. People are friendly and willing to help because they have all been in our shoes.

Physically we are fine. Your first day is very long, your second day is longer. The third day you just kind of get numb and the fourth day you tell yourself that you can get through it and before you know it the day is over and you get a 3 day weekend to rest for the next week.

The reason we are doing this is that we have no pensions to live off of at this point in our lives. We do have money in the bank but we don't want to use it up too fast. So a lot of people do this work camping thing for Amazon because you can make a lot of money in 3-4 months. Then you can go and continue traveling around.

So that is where we are for awhile. Stay frosty.
Posted by MNdrifters at 9:04 AM 2 comments: