I will have to be honest when I say that I was a little leery about pulling into this camp ground. 835 RV sites. That is by far the largest RV resort that we have ever been to. I thought it was going to be loud with people running and driving all over the place. A free for all kind of place. But I will say that I was wrong. 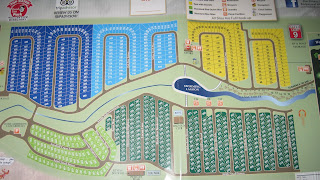 There is a sulphur spring in the middle of the campground which they have turned into a pretty nice swimming hole. You do get the smell of sulphur when the wind is from the right direction. It is a good thing we spent the summer in Yellowstone because we have gotten used to the smell. Actually if you are sly enough you can get away with ripping one every once in awhile. Lisa told me that.

We are in the yellow area of the resort. On this side of the resort are the premium sites. Boy are we glad that we splurged for one of those. They are about 75-80 feet long and about 30 feet wide. We go for our morning walks to the otherside. They would be okay but they are quite a bit smaller in size and it is more crowded.

Down at this end they have a Tiki Bar that they open for the weekend.

There is also a nice camp store that sells everything from beer, camp supplies, ice cream and beer. Since it is a RV resort, there are other activities planned throughout the week. Bingo, breakfasts, hamburgers and hotdogs Friday night, pickleball lessons, pickle ball court and shuffleboard, several laundry facilities pool and of course the swimming area. All-in-all it would be a nice place to spend the winter. We are only here for a month so that we can enjoy other areas of Florida.

Wednesday found us heading to the beach. Not Daytona though. We went to New Smyrna. Lisa and I have and argument on how it is pronounced. I like New Ssshhhmearna versus her New Smirna. You can drive on the beach for a small fee which is so worth it. That way you don't have to schlep your chairs, umbrella and cooler miles to the beach all the while listening to your spouse say"Gosh it is hot! Can you hold my stuff too?" The water was a little cool, 65 degrees. But then it is January. 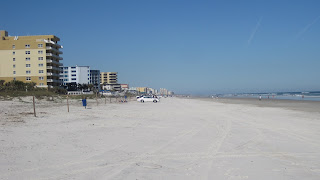 It was not that busy today so we had plenty of beach of our own. 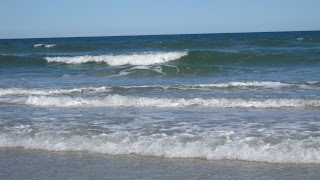 This beach is on the Atlantic side. So we sunned, waded and walked the beach for awhile. Then we drove to both ends as far as they would let you drive.

At the far northern end there was a natural area in the dunes. We walked that a little bit and found some tortoises living amongst the dunes. 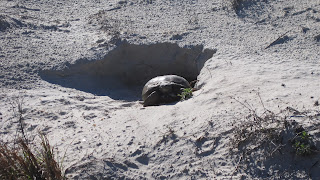 That is it for today. The weather has been very nice. We think we will stay awhile.
Posted by MNdrifters at 11:35 AM 9 comments:

We left the bitter cold temperatures behind us and headed to Campbellsville KY. to pick up our fifthwheel. We left it there because the owners were nice enough not to charge us and also we didn't want to drag it all the way up to Minnesota and then turn around and then drive it to Florida. We got in early enough to de-winterize it. The temps weren't too bad. In the 50's so we didn't have to worry about frozen water lines and sewer lines. The warm weather brought some pretty strong winds causing us to stay in C-ville  for an added day.(That's what they call it. There is also E-town. They shorten it when the name is too long. E-town is Elizabethtown.) 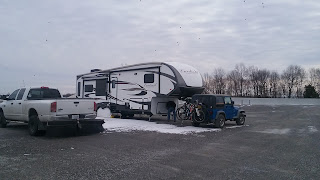 We left C-ville and made the short drive to Knoxville TN. We pulled into the KOA and figured that a KOA would be pretty nice. After all they have a reputation. This one was not. The sites where narrow, muddy. and over priced. Our awning would have touched our neighbor if we would have put it out. So we only paid for 2 days and then went on a campground recon mission. We checked out the Good Sam park, Escapees and a Passport America park. The Escapees was the best and it was eleven dollars a night cheaper. You don't have to be a member to stay here so we packed up and moved. In summer you have to have a reservation because they fill up. So if you are a snowbird passing through this area, skip the KOA and go 5 miles farther south to the Raccoon Valley Escapees park.


We are in the area for 6 days for an appointment to get our sewer valves replaced. So what to do, what to do? There are a few sights to see. So the first thing we did was to go to Dandridge, TN to the Bush's Baked Beans factory. They have a nice small museum that relates the history of the Bush family. There are no factory tours but they have a very informative film that shows you the whole process. It is a highly automated and modern factory for being family owned. What stuck out for me is that they have a machine that will label bean cans at a rate of 1000 per minute. Amazing that there is that many cans of beans being consumed. Stop by if you are in this area. The price is right. It was free. 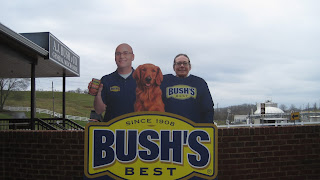 They also have a scale that will tell you how much you weigh in beans.


On the way back to Knoxville we drove by Douglas Lake created by Douglas Dam. Like Lake Mead out in Nevada, the water is very low. It looks like it is 30-50 feet below the high water mark. Signs of the ongoing drought. 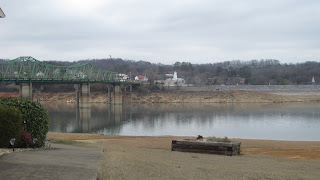 Knoxville was the host to a World's Fair back in 1982. So we drove downtown to the World's Fair park. Lisa was pretty impressed by the Sunsphere. (I wonder why?)

You can go inside it for a nice panoramic view of Knoxville. That is also free. Also downtown is the Market District. A revitalized area with many restaurants and stores. 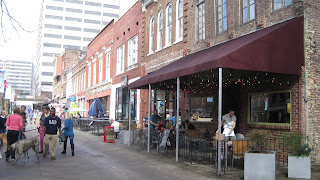 The day finally came to get our sewer valves replaced. Let me tell you that that is not an easy job on this particular model. The technician was pretty frustrated by the end of the day. So much so that he never had time to finish it. So we will be here another day.

While we were gone today, we drove to Gatlinburg TN. Unfortunately there were just too many tourists so we turned around and drove back to Knoxville. We couldn't get to our rig yet so we found a park with ducks and geese in it. Once you start feeding one, the word spreads fast. Soon there are waterfowl everywhere.
It was getting late in the afternoon so we drove back to where the RV was getting worked on.  Lisa found a friend. 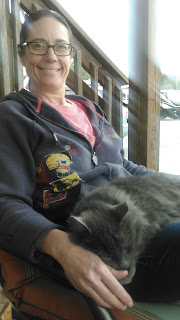 So hopefully it will be fixed in the morning and then we will start to head to Florida and the warmth and also the sun. We have not seen the sun in over a week now.

As I write this, it is -17 degrees Fahrenheit (-27 Celsius) with a whopping high of -9 F. (-22 C.). That is f@#$ing cold by any means. I saw a picture of some college kids in Alaska in their underpants standing next to a temperature sign that said -45 F. I can understand that being Alaska and everything, but this is the lower 48.

The interesting thing about this part of the country is it's geography. There is the Red River that flows north all the way to Hudson Bay. So Arctic air just settles into the Red River valley and can linger for days at a time. The people that settled this area were very hardy folks. Mostly Scandinavian coming from very cold parts of the world. You can probably tell from our accents that we come from this area, dontcha know. They found that the farmland was nearly the best in the world and so that is why they stayed.

My truck is a diesel so it always needs to be plugged in or else you are not going anywhere. Auto starts are worth their weight in gold up here. If you fuel up your truck you have to make sure you have a winter blend, otherwise it will gel up and not run. They use a blend of 50% #1 and 50% #2. Plus, I add a fuel supplement just in case. Too go any where you have to start the truck 15-20 minutes ahead of time. Hopefully the day before you left the heater on high. You get in and the seats are frozen. I can't grab and hold onto the steering wheel without gloves on. Once you start to roll down the street the shocks are so stiff they don't do anything. You can't go over 40 mph because the transmission fluid is so thick. You have to drive it a little to get it to warm up.

I am surprised that there aren't more auto thefts here. Everywhere you go, people leave their cars running. Nobody shuts them off. It is against the law to leave your keys in your car but apparently it isn't enforced here in the winter. Maybe the punishment for stealing someones car doubles in the winter.

We dress in many, many layers to keep warm. Sometimes that doesn't even help. Then when you step into a store , you are sweating because it is so hot.

There are winter activities you can enjoy here. Don't get me wrong. I used to have snowmobiles, ATV's, snow skis, warm winter clothing and have even done some ice fishing. So there are opportunities to get out and enjoy the cold if a person wanted too. But we got rid of all of that to pursue this lifestyle. I enjoyed snowmobiling so much one time that I frostbit my cheek. Not severe enough to wreck my well chiselled features, just enough that when I put my hand on it to warm it. It was frozen solid. It was weird feeling that and knowing it could have been worse.

So this goes on and on for 3-4 months at a time. At least it is too cold to snow. Yes, that does happen here. So if anyone wonders why we really are not fond of the snow and cold, that is part of it. I could go on about what it does to you mentally, ( Lisa is really crabby!) but I don't want to be long winded. If you ask us if we like the snow, please don't feel offended if we blurt out some obscenities before we catch ourselves and politely say "No".

Our new friend is called alcohol. It is also called anti-freeze up here. So stay frosty my friends. We start heading south in a few days.
Posted by MNdrifters at 9:58 AM 6 comments: