We are back in Minnesota for the summer for a number of reasons. Number one is that our son is getting married and we are very happy for him and his new bride. Also we need to visit family and friends. Lisa's grandfather just turned 100 which is a huge milestone. One that I hope that I never see. And the way that I see it, he ain't getting any younger.

We plan on being here till the end of September and then dragging our butts down to Kentucky to give Amazon another whirl. So what do we do for the 4 months that we are here. I think we have seen all 10,000 lakes. We have seen Paul Bunyan and Babe the Blue Ox. We have even been to the Mall of America a thousand times. We get jobs! Nooooooooo!

We just spent 5 months in Florida. Relaxing, sunning our bums, killing our fair share of brain cells. We learned that relaxing that much can get expensive, not to mention the other costs that we incurred down there. New tires, new hitch, a new tooth for Dino and just plain expenses. Plus we have a wishlist of items to get in the future. New generator, new recliners, new couch, new glasses and Lil' Blue needs a makeover.

So instead of sitting around, we decided to treat this as a work camping opportunity. We both got jobs at one of my former employers who were quite happy to have us for the summer. That way we are on the same shift and schedule. The pay is good, can't complain about that. Plus it should put us in the black. Win, win.

Don't hold your breath waiting for updates from us. It should be a quiet summer.

As in the words of Paul Harvey, "And now the rest of the story".

We were laying low in an undisclosed location. 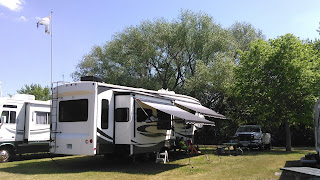 Using our assumed names. Mine is Tango Allejandro and Lisa's is Josephene Butterpump. She will also answer to Booger Lips. We were very aware that there were VIP's in the area. (VIP-Very Incontinent People). We were out enjoying a wonderful Minnesota afternoon with cocktails and revelry when who do you think pulls into the very campground we were in. We couldn't believe it! Daisy and Dakota!
We have been very good friends with Daisy but it was the first time we met Dakota. What a nice young lady she was. They also brought Jim and Barb. RV rock gods from jimandbarbsrvadventure.blogspot.com. They have nearly 400,000 hits on their blog so we were quite humbled when they wanted to camp near us. "Be still my giddy heart". Jim and Barb asked us, "What is there to do in this area?" To which we said "Nothing, you should probably move on". But they convinced us to give them the grand tour.

Day 1- First stop on the amazing west central Minnesota tour was stopping in Rothsay, Minnesota. You have to say it like a Norwegian. Roth-Saaaay Mini-sooo-dah. Home of the Giant Booming Prairie Chicken.

These creatures were huge when they had free reign of the prairie. This is actually life size. For the next stop, stop #2 we took them out to a genuine Minnesota woods. We tried to ditch them there but they are just too darn fast for old people.

Stop #3 was a short drive over to Phelp's Mill. A turn of the century flour mill. This mill is in very good condition. It doesn't grind flour any more but a lot of the equipment is still inside. Stop #4 was the infamous Insane Asylum of Fergus Falls. An amazing building in it's own right. But, alas, we were a couple of years too late to drop off Jim and Barb. It was closed.  Stop #5 was the giant Otter of Fergus Falls. Jim loved this big guy. I didn't have the heart to tell him it wasn't real. 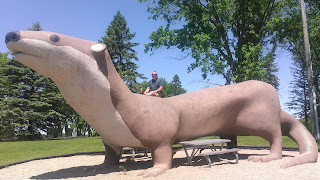 He was up there for about an hour. He just would not come down. Only when he declared that he had to poop where we able to get him off of it so that other kids could get their turn. That wrapped up day 1.

Day number 2 involved traveling to the metropolis known as Fargo. But first we travelled to Moorhead to show them our house that we lived in. Lisa and I are both from this area. Next stop was to see the most famous star that ever came from this area. Thats right everybody. The woodchipper from the movie "Fargo". 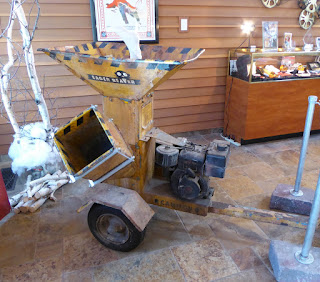 For some odd reason he just wanted to keep trying to stuff Barb into it. Mumbling something that sounded like this "pie ditch, pie!" So we quickly left the wood chipper behind. We decided to look for lunch places but being in Fargo, most breweries didn't open until after noon. How can you do some day drinking if you can't start in the morning? We found one that opened at 11 so we went. Plus the girls found coupon books. Then we went to JL Beers. One of our favorite watering holes. We went to the Scheels super store because again the girls found free Ferris Wheel coupons.
We then showed them all over Fargo. It took about a half hour. Then back to the campground and Happy Hour.

Day #3 involved Lisa and Barb driving into Fargo again because Daisy was having a spa day. Jim and I hung out in Barnesville. We did take Dakota swimming. 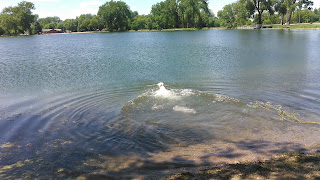 All of our down time for some reason involved helping them get rid of all of the alcohol that they couldn't bring into Canada. I am glad we were there to take one for the team. Dinners and "Happy Hours" where frequent and there were many. We even played a game of strip ladder golf. All kidding aside. We are glad that they could make the time to visit with us. It has been awhile and we just haven't been able to go to where they are at. So we really appreciate the effort that they make for us. Until our paths cross again.

Florida Wrap Up or It's All About the Butts.

We arrived in Florida in mid January and overstayed our welcome until the end of May. It was a nice visit. We enjoyed a couple of different areas and really got to know them very well. Lots of exploring was done and good times where abundant. Wait for it. But.............

"Lessons Learned", is what I should have titled this blog. We really learned a lot about wintering in Florida. We were under the impression that you had to get there early and book a spot in one camp ground the entire winter because they are full and have waiting lists. I am sure in some areas like Key West that is true, but .......(there's that word again) in central Florida it is not.

Our first month we stayed at Wekiva Falls. It was a huge campground near Sanford Florida. It never filled up. They had lots of empty spaces. It was also the nicest campground we stayed at except for Ft. Wilderness. The next 2 months we stayed near Tampa at Southern Aire RV Resort. It was maybe 50% full the entire time we were there. The rest of our time was spent between 2 campgrounds because we joined Thousand Trails. So we stayed at Thousand Trails and Lake Magic. Both were far from full but....... (word again) it was late in the season now. We stayed a week in Ft. Wilderness and they were very empty. I wish their rates would have reflected that but........ ().() no.

Lessons learned now. We joined Thousand Trails (a campground membership) because financially it was cheaper than staying a month and 1 or 2 weeks at a campground. The problem we had with this is that you have to move every 14 days. That is why we bounced around between Thousand Trails and Lake Magic. Also the amount of rules imposed on us. Like at Thousand Trails you could not wash your RV even though they ran sprinklers all day. Also you could not do any maintenance at all. We had tire issues and I was going to pull them off and get new ones. They said "no", but...... ().() they gave us a card of someone who will come to your sight and do it for you. I had to hook up and drive to the tire shop and back again. They had mobile RV techs going in and out of the campground all day long. I think they must get a piece of the action.

Lesson learned: We got to Wekiva Falls in January and the nights were a little cool. So we used our propane fire pit. We emptied our propane tank , so I took it in to exchange it. Emptied it again in 1 week. So I took it in again to exchange. Then I noticed the sign at Publix which said. Propane exchange. 15 lbs. in small print. They were putting 15lbs. instead of 20lbs. Then I noticed it at all of the propane exchanges I saw.

Lesson learned: We were enjoying the warm winter weather in sunny Florida, flocking with the rest of the Snowbirds. We were told of the great migration that starts April 1st. We really didn't believe it but..... we witnessed it first hand. April 1st arrived and all of a sudden the RV parks looked a lot emptier. Amazing to behold. I can understand because after April 1st it got extremely hot quickly.

Our son and his new fiancee came for a visit. They were going to visit for 12 days and wanted to take in the attractions that make Orlando famous. Disney and Universal along with some beach time thrown in. We moved the RV over to FT. Wilderness. Disney's campground. That is what the perfect campground looks like in our eyes. Immaculately clean. The bath house is nicer than most peoples houses. That is the only camp ground that I will pay over one hundred dollars a night for. But....... not for too many nights though.

It was a very hectic 12 days. We always feel that we need a vacation from Disney after we had just been to Disney. Long days of sun and fun and of course battling the crowds. To say the least, we really enjoy it there. They opened the new Avatar land while we were there. Animal Kingdom on opening day was a mad house. Just the line to get into that section snaked around to the front of the park and was actually growing to the exit of the park. The wait times for the rides where ranging from 180 minutes to 250 minutes. Needless to say we didn't even get in.

I think Heather really enjoyed herself. She had never been there before. It was fun to listen to her scream and gasp. There is too much to list of everything we did so I will just end with some pictures of the our fun times.


Till the next adventure.