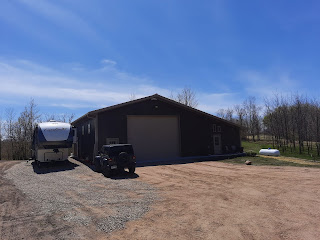 When we last left our intrepid explorers, they were very busy cleaning out their barn so that it could be insulated with spray foam. A daring feat by any means, not to be taken lightly. Carefully removing piece by piece the treasures from within. Trying not to disturb the vile evilness that lurks inside.

I'm sorry. I tried to make cleaning out the barn sound exciting but in reality, it wasn't. We got it done though and we were ready for the spray foam company to come in and do their thing. 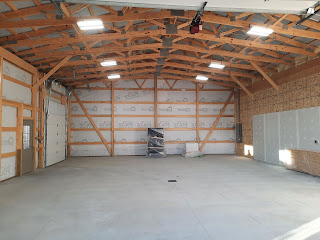 We removed everything except for our refrigerator and freezer and a pile of wood along the wall that wasn't going to be foamed. They will just have to work around those. We originally planned on just doing the ceiling but changed our minds once we started clearing things out. We didn't want to have to do it again so we bit the bullet and did it all at once. 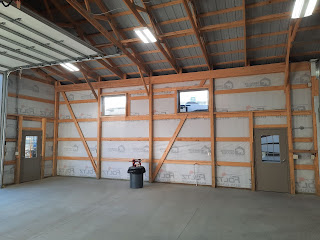 If you notice closely, all of our house wrap is right side up. Not upside down like other people we know. 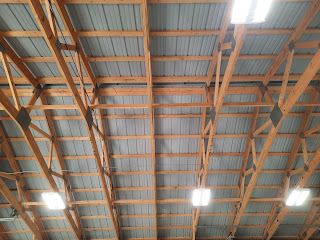 Just a couple of before pictures. The foam company came in with 2 foam trucks and 2 foam crews and foamed the entire barn in one day which was awesome. They originally planned on 2 days with one crew so that worked out great. 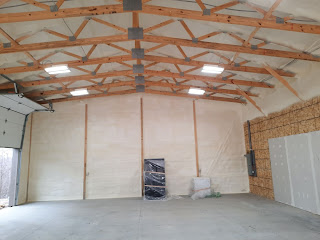 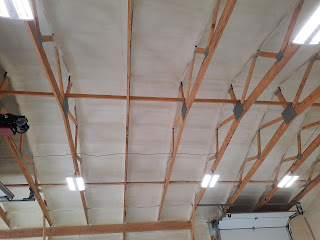 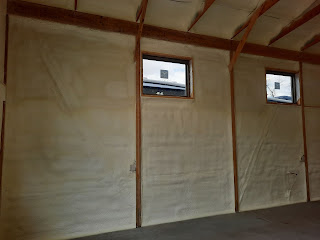 They sprayed 3 inches of foam everywhere. They did an excellent job. Now before we started to haul everything back in, I wanted to put up some peg board along the back wall. I also wanted to organize things better than before. 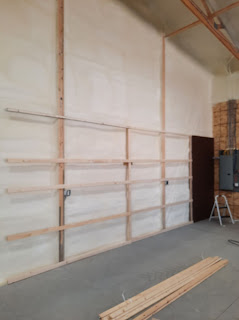 With the walls foamed now, there was nothing to nail the peg board to. So I ran stringers across the main beams and then nailed the peg board to them. Adapt, improvise and overcome. One of the many mottos I live by. 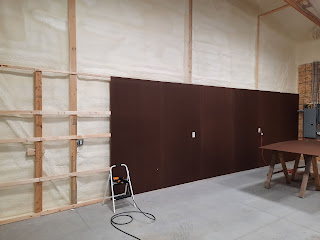 It went along very well. So much so that we decided to finish the other walls like that also. It was a good idea because we didn't want to have to take out a loan and finish the inside with plywood or OSB. The peg board was $14.99 a sheet versus $40.00 for 7/16th inch OSB. That is just crazy the way lumber prices have skyrocketed. 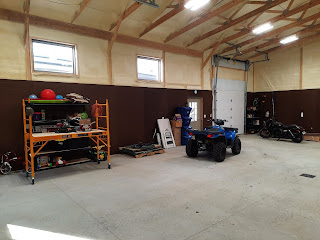 With that project done, we could move everything back in. I may have to put something up above the peg board later on. But for now, it is fine. It is time to get some outdoor projects done.
Our property has been overgrown with prickly ash and sumac. So if anyone has some spare time and wants to cut brush, feel free. I had a pull behind brush cutter that turned out to be the biggest piece of poo poo I have ever seen. It quit working over a year ago and the place I was taking it to get fixed told me they didn't want to see it again. 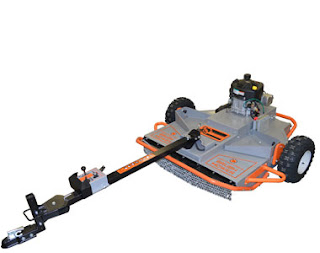 So if you plan on buying this type of brush mower don't. Save the $1800.00 dollars for something better. So with my mower down, we rented a walk behind brush cutter. It was called the "Billy Goat". Aptly named because this thing went through everything that was in front of it. 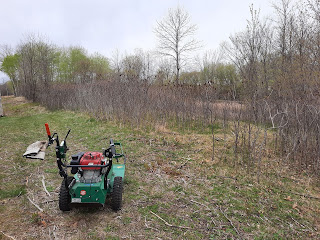 Here I am about to tackle this area of prickly ash and sumac. 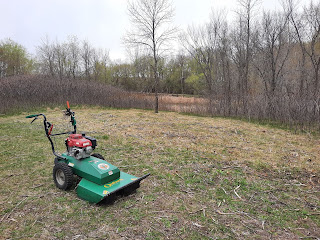 And this is the area after the Billy Goat got done with it. It will cut down anything that it can mow over. If the tree is too big you will know because it just wants to climb it. We took turns cutting. Here is Lisa doing a fine job of it. 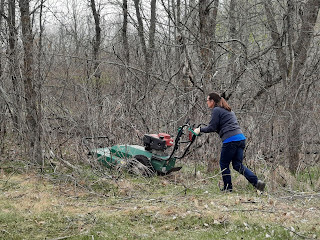 Now when ever I post pictures like that, everyone always says, "Oh, all we see is Lisa doing all of the work". 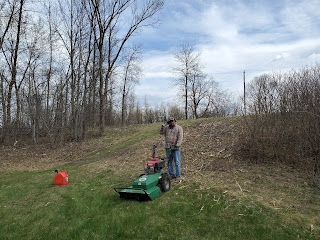 So now you can see that I too did some brush cutting. Even while handicapped. After 6 to 7 hours of us cutting we were able to clear a nice size area. 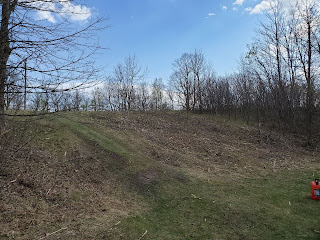 We have lots of acreage to do but for now we are done with that for awhile. It was a lot of hard work and we think we will just rent it once a year and just keep clearing all of the ash and sumac. Another project on the to do list was our downspout on the cabin. Whenever it rains, it washes the dirt away. 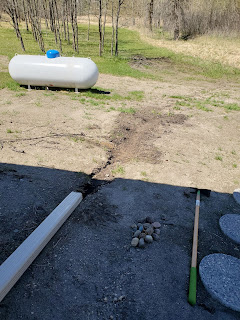 It has rained a lot this spring. So we wanted to try and prevent that so Lisa made a trench for the water to follow and then filled it with rock. 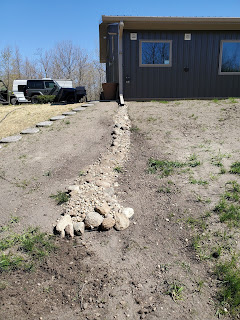 Our hopes are that the water will just continue to follow that same course. We planted grass seed there but it just washes away.
Now the news everyone has been waiting for. My finger. It is still as painful as ever. I have been going to therapy 2 times a week just to have them bend and mangle it which makes it hurt even more. With no real progress being made at all. So I have cut down to once a week of excruciating pain sessions. I have been in contact with the Mayo clinic in Rochester to see if they will look at it. If I could cross that finger for luck, I would. Personally, I am leaning more and more to just cutting it off and moving on to more of a normal life. This thing is so irritating and frustrating that I can hardly stand it.
The beginning of May was a very big week for holidays and special occasions for us. We had "May the fourth", otherwise known as Star Wars day. Lisa dressed up like Princess Leia. I was a Wookie. Then the next day was Cinco de Mayo. Endless fajitas for us. Then the big day. We had another anniversary! I beat the odds in Vegas. 32 years. I smothered Lisa with cards and flowers. 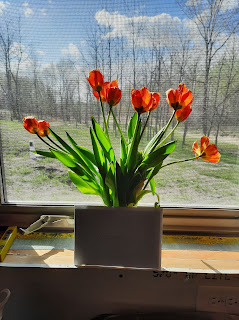 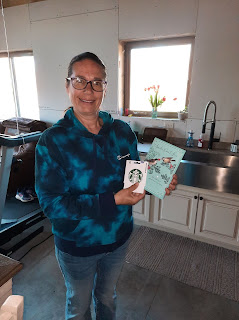 There were also plenty of balloons involved. 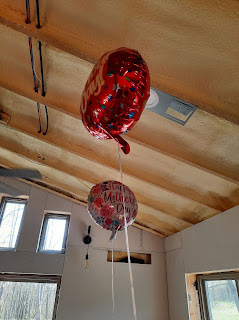 After 32 years of marriage, Lisa has finally figured out what I like best. 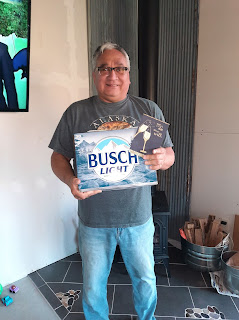 This is a real life 30 pack! Imported from Fargo. You can't buy 30 packs here where we live for some reason. Only 24 packs. Funhaters. And finally Mother's day was on Sunday. She feels spoiled after all of the attention I gave her.
That's it for now. Our next big projects will be asphalt on the driveway and a patio out back.
Posted by MNdrifters at 5:42 AM 10 comments: