A Day in the Life or a Blog About Nothing

BEEP, BEEP, BEEP! Was that an alarm clock I just heard? WHY? We are not working right now. Apparently our friends, Doug and Cheryl, who we worked with at the Strawberry Festival (I want to curl up in a ball and suck my thumb when I think of that) are leaving today and they are leaving around 9:00 to 9:30 in the morning. Really. Isn't it still dark at that time? I thought they were decent people but now I am not so sure. So Lisa set an alarm (without telling me) so that we would be able to have our required 2 cups of coffee. Also to give us time to wipe the drool out of the corner of our mouths. We are so high maintenance.

We bundled up because the news said that it was a very cold 46 this morning. Luckily we had our winter gear since we are from Minnesota and trudged on over to their site for handshakes and hugs. I always thought that you were supposed to ride off into the sunset, not the sunrise. Maybe they need to be in Michigan by tonight. I don't know. So off they went to greener pastures.

I said to Lisa, "Well I might as well make breakfast since we are up at the crack of dawn". I rummage through our freezer and find little containers of leftover fajita's. Breakfast burritos it is then. Then it is time for our walk, or as I like to call it my heart attack test. Every day she makes me have to pass the test. If I don't have a heart attack I pass and can enjoy this lifestyle another day. We like to walk for an hour at a vigorous pace. It is almost prancersizing (google it, you will be amazed). It is a little unpleasant to walk vigorously with 2 burritos bouncing around inside your gullet. But being the trained professionals that we are we made it.

The day is quickly moving along. I start my lunch.

I call it the "magical bowl of noodle goodness". I got turned on to these in Yellowstone. They are more expensive than just Ramen noodles but, hell, I'm worth it. I left Yellowstone with cases of these, worried that I may never find them again. On our travels though I have come up with a secret supplier to keep my noodle habit going. I'm not going to tell you who it is because I don't want there to be a nation wide shortage or even worse, a price spike.
Next item on the agenda is to resupply after the Strawberry Festival and we have our daughter and her friend visiting. So it is off to Aldi. We love Aldi. If we spend $120 at Wally-world, we spend only $80.00 at Aldi. It is such a huge difference. Bring your own reusable shopping bags. That is one way they keep prices down. You can get bags there, but they charge you for them. Another ingenious idea of theirs is that it costs you a quarter to rent a shopping cart. You get the quarter back when you return the cart. I think it also helps with preventing theft of their carts. I am not going to steal their $200 shopping cart and risk losing my quarter!
So we return home with our bountiful booty and Lisa multi-tasks by putting her booty away and also doing our laundry. We thought that we would have time to wash our home but looking and judging the position of the sun, I had to declare that the work day was done. This is how I do it. I look at the sun and formally in an authoritative voice say "The sun is over the mizzen mast". And by doing that all work ceases and cocktails are picked up. "Cheers" are echoed by all crew members on a successful day.

Stay tuned in for tomorrow's wild and fabulous adventures. "Hoozah!" 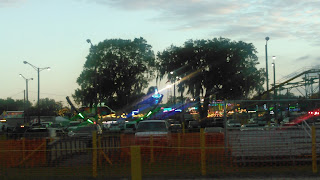 It started with oriantation. That should have been the first sign. Talk about organized chaos. 50 people mingling around without direction. We finally filled out our paperwork and were told to show up on Thursday at the parking trailer. Great!
"Uh, where is the parking trailer?"
"It's over there, just off of Seminole Lake road."
"Uh, where is Seminole Lake Road?"
"It's on the west end of the complex."
"Uh, which way is west?"
And so it was off to a flying start. They obviously assumed that we are familiar with this festival and the area around it.

Thursday was baptism by fire. We found the parking trailer to punch in. Most of the people that are doing the car parking look like they have just come from the homeless shelter. Seriously, I really think they did. Then there are just a handful of work campers. We went to our lot and met the lot supervisor Doug. Nice enough guy. Really talks a lot. He told us where to park the cars and said "go to it". Just like that we were professional car parkers.

It is important to get them lined up right to maximize your space. You have to be on top of it or else they will park anywhere. I never thought of parking cars as rocket science. But apparently to some of our other co-workers it was. They needed to be re-trained daily. It took all of my patience and restraint from going up to them every day and shoving my flag up thier ass's.

We were fortunate to work with another couple who had common sense. Doug and Cheryl Palin.

We met them briefly working at Amazon. We  worked with them for 12 hours a day for 11 days and really got to know them. That has always been a plus for this lifestyle. Meeting some nice people we will always keep in touch with and hopefully run into each other again down the road.

After Thursday came the first full weekend of the festival. This thing is almost as large as a state fair. It got busy fast. That Sunday 981 cars came through our gate (Sorry, no spread sheet to go with those numbers). Our lot is not big enough to park all those cars so when we get full we send them to the next lot down the line. Common sense would say that you would close your gate then, right? Not here. What really makes it fun is that when the other lots are full they send them to us. Cars start circling in the lots and that does not make for happy drivers.

People get angry and then take out their rage on the first person they see. Who do they see? Us. Not the parking lot managers, not the fair board, but us lowly little flag people. We have been bitched at countless times. Lisa was called "Booger lips" by one highly intelligent individual. She told him to treat people with respect, it wasn't our fault. I told one lady that I only get paid to wave the flag, so I waved it in her face. I think one guy wanted me to give him his 5 dollars back because we didn't have a spot for him. I told him to go back to the front gate and get it.

Every morning was interesting. I would walk the lot and find out where all the dirty diapers and vomit piles where so that I wouldn't step in them. Fair goers are really classy people. A funny thing did happen with a diaper though. The vendors come in before the gates to the midway open. This one group always showed up in 4-5 vehicles. So I park the first one, step over to the next spot next to him and the second car comes in and runs over one of the dirty diapers. It explodes all over his buddies car. It was hilarious.

We were in blue lot. The next lot over was the red lot. Most of those people had no clue what was going on. They would just stand in the middle of the road and just flap their flags. You could have gotten one of those inflatable wacky guys to do the same job. 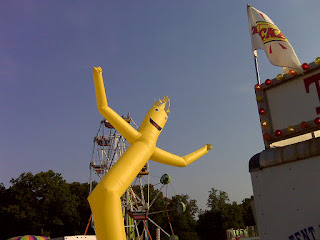 This job was one of those things that we can say we did and won't do again. 11 twelve hour days is a long stretch to work. You can't leave for lunch, we did get breaks though. We couldn't even go inside to see the fair. Being out in the sun for that long is hard on a person. People bitching at you. The low pay. All in all it just would not be worth it. Like I said, Live and learn.

Two good things that did come out of the whole ordeal were, getting to know Doug and Cheryl better and we met some other friendly people that we may be working for in the future. Stay tuned to see how that pans out.