Before I tell you the tale of our Murder Mystery Dinner Theater, I want to finish some other business. First. My last blog post may have given you the idea that we hate winter which is untrue. We loathe it. But we have tried to make the best of it.

What does Minnesota, the land of 10,000 lakes, have in abundance? Ice, frozen water, not the Immigration and Customs Enforcement Agency. So one frigid, frozen night we took a little drive with the heater in our truck on high, to a town not too far away. The town of Detroit Lakes, MN. Every winter they host a winter festival called Polar Fest. The night we went there the temperature was a balmy -10 F. But we went anyways. The big draw is the ice castle that they make with blocks of ice from the lake. It's best to see it at night because they light it up. 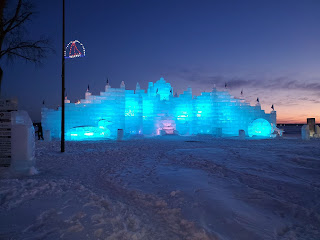 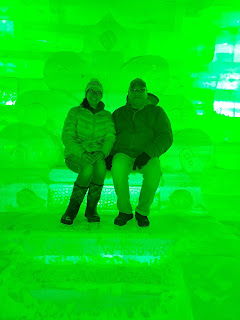 Also as proof that we got outside and enjoyed some winter, we had some VIP's stay with us one weekend. My brother-in-law, Jeff, is one of the founders of the rock band Flint, "A Spark of Hot Rock".  He brought his snowmobiles for us to ride around on. My sister, Mrs. Jeff Cerise, brought her snowshoes to hike around on. Luckily the weekend weather called for temps 20 degrees above zero. That really makes a difference. After some sledding and hiking I lit a hobo fire in our burning barrel, because our fire pit is buried under 3 feet of snow, and had some cocktails. 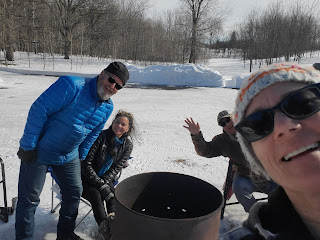 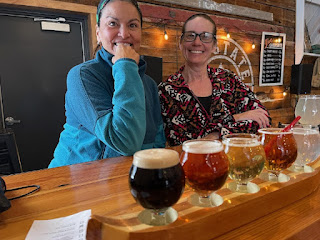 Mrs. Cerise and Perky.
So as you can see, we are trying to make the best of it. Now for the gruesome gory details of our Murder Mystery Dinner Theater.

*Some images may not be suitable for children or those with a weak constitution.

Mrs. Cerise and Perky had snowshoed through a lot of our woods that weekend while Jeff from Flint,  A Spark of Hot Rock, snowmobiled around the woods and the lake. So as we all did that we did not notice anything out of the ordinary. After Jeff from Flint, A Spark of Hot Rock, and Mrs. Cerise left, Lisa was out snowshoeing one day. She was following a deer trail up from the lake that goes near our cabin when I got a call from her. She said to come down and look. Something was murdered. As I walked down the deer trail I came upon this gory scene. 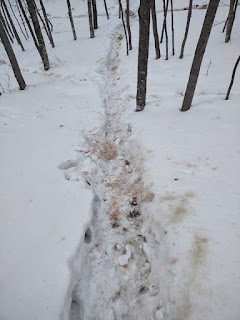 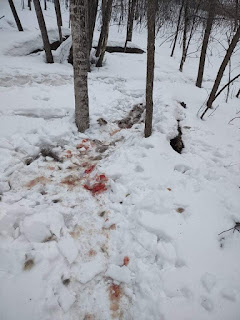 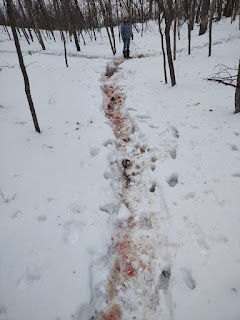 The area of the kill site was quite large and very bloody so we know that an animal didn't just happen upon a dead carcass. This was a a live deer being taken down by something. Since it was warming up here the tracks all around where very hard to find. So our detective minds went to work on the case. We phoned Jim, the renowned wildlife specialist of SD for his input. We phoned neighbors. We phoned the DNR. All in an attempt to find out what might have caused this massacre. I checked my trail cam and we do have a coyote that lives in the area. I also saw a pack of dogs roam through our property from some farm. As we talked to people and googled things it started to form a clearer picture.
There was the absence of any bones. Everything was gone except about a 1 foot square piece of fur and the contents of what was left in the stomach. So we narrowed it down to what might have killed the deer who we now think might have been the one we call Wonky. She was injured from what we believe to be a car accident. 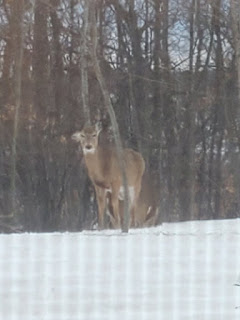 This is the last picture we got of Wonky. She always had one ear that went off to the side. So our list of suspects are: a pack of dogs, a pack of coyotes, a Sasquatch, a Predator from the Predator movie. (Jim's thought. I must of talked to him when he was drinking. Oh wait, he's always drinking.) 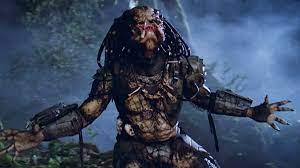 I only throw that one in because Jim said that because of the lack of tracks. The Predator can easily move through trees. Or maybe a wolf or pack of wolves.
Now to eliminate the suspects. The dogs we haven't seen in a month or two and if I do see them chasing deer I will take care of them once and for all. One coyote couldn't take down a deer and we do have a pack of them around, but they make such a racket, we would have heard them if they are in the area. There have only been one Sasquatch egg this past fall so I don't think they are in this part of the woods. We have not heard any Predator space ships lately so we ruled him out also. Sadly to Jim's disappointment. That just left the wolf or pack of wolves.
The DNR said that a single wolf could eat a deer but that seems unlikely. I googled it and google says that a wolf can eat 20 pounds of meat. They will also eat the bones and there were no bones left at all. Just blood and some fur. So we believe there may be a pack of wolves in the area and the DNR guy says that they will stay as long as there is a food source. We have lots of deer. 21 was the most we had in our yard at once.
We had our grandkids visit us this past weekend. As we were walking outside we came across another kill site near the cabin. 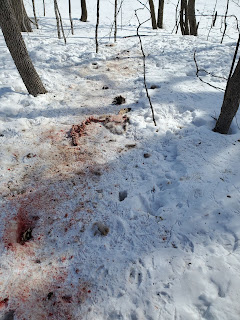 Again, lots of blood. There was just a small section of spine and part of a leg not eaten. So that now makes two. The deer that we do see around now are on the alert all of the time so that makes us a little leery as we walk around. We walk around now to see if there are more kills but haven't found any yet. They seem to be about 5-7 days apart. So that is our excitement. It's cool that the wolves are making a comeback. Just like the Eagles. We love seeing them but they are a little too close for comfort, especially with small kids.
Speaking of the grand kids, we had them out here for the weekend. It was too cold to play outside, so they ran of some steam in the barn. We have it heated now and they had fun.

Work on the cabin continues. We got the utility room walls done. Also the bedroom walls and ceiling. 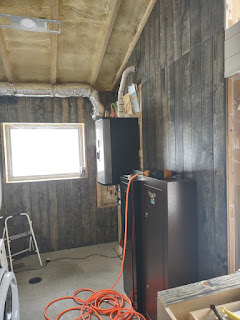 So things are progressing along. Until next time.