Mouse-agedon and the Tale of Rambo Mouse 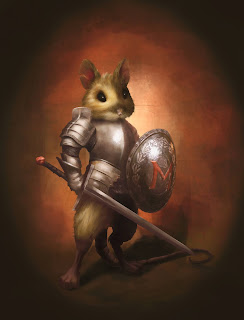 We love living in the country. The solitude and beauty is all around us. We love looking out our windows and seeing an abundance of wildlife. Deer, eagle, fox, raccoons, tree frogs and yes, even different types of bugs, especially the moths, that we never knew we had. Like everything good, there are trade offs.

The mosquitos are not that bad this year due to a drought. The deer flies and horse flies I hate with a vengeance. I keep asking myself, "Dear baby Jesus, what is the purpose of these biting flies?" These flies love to just buzz around your head and then when you feel them land on your head, you instinctively swat at them, hitting nothing but your head. I then imagine the flies laughing at me and saying "Why do you keep hitting yourself?"

But the real reason why I wanted to share our (my) exploits is the mouse problem we have out in the wilderness. Granted, we cut out our homestead in the forest that used to be theirs and I honestly thought that we could all live harmoniously, hand in little hand. But NNNNNOOOOOOO! They couldn't stay out of our area. NNNNNNOOOOO! They just had to keep encroaching upon us. Wrecking our stuff with their ever nonstop chewing on things. I have on numerous occasions brought my ATV's into the shop because they broke down. Only to find mice have made homes inside them and chewed through wires. Built nests in air filters. It goes on and on. My sons camper had a water leak under the shower. So I tore it apart to find that mice have chewed through the drain pipe. 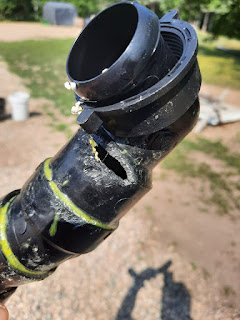 So I have officially declared war on the mouse population around us. I have set out a trap line that I check every day. I find that the old fashioned spring loaded trap works the best. I just put a little peanut butter on it and the mice love it. You know immediately if you have a mouse or not and they kill quickly. My trap line consists of 1 trap in the barn, 2 traps in the fifthwheel, 1 trap in the pickup camper and one trap in my sons camper. In the past couple of weeks I have trapped 10 mice now in those areas. I don't know how they are getting in the campers, but they are. The score is 10 and 1.

Which now brings me to the story of Rambo mouse. I set a trap in my sons camper and in the morning I checked it as always. Only there was no trap where I left it. It was gone. So as I am looking around I spot it behind the toilet and there is a mouse still attached to it. It came down on his front paw. That's never happened before. So I go out and get a 5 gallon bucket and my reacher thingy. I grab the trap and lift the trap and a very angry mouse and put it into the bucket. I then put that bucket into the Ranger and grab my 22 revolver to humanely put down the mouse, away from the house.

We have a clearing back in the woods. So I wanted to take the mouse out there. We were going to have a showdown, Clint Eastwood style(cue the music). To be fair I put one arm behind my back because the mouse still had the trap on his leg. So I dumped the mouse out of the bucket and stepped back. I lined up my shot and POW! I missed the mouse and hit the trap, breaking it. It took only a second until the mouse realized it was free and when it did, it's eyes became RED and it let out a tremendous ROAR and charged!

Now I have read accounts of men in battle. Your vision becomes blurry and things go into slow motion. The facts can get misconstrued. One thing is for sure though. I swear I heard a little girl screaming, just as clear as if she was standing next to me.

The mouse charged! POW! POW! POW! It kept coming and coming! Jumping this way and that way. It was like a crazed Ninja on steroids. POW! It's coming right for me. (Little girl screaming in the woods). POW! In desperation I kicked at it and missed. I jumped out of its path at the last minute. It was like a charging rhino. It then ran under the Ranger so I jumped in it and backed it up. As I was distracted the mouse saw it's chance to escape. It saw the tree line and made a break for it. I jumped out of the Ranger, guns ablazing. POW,POW,POW! I missed. The mouse got away. I looked around me for the little girl but saw no one. With all of the dignity I could muster, I saluted my worthy adversary, did an about face, and got the heck out of there. Hoping that some time in the future a mutant 3 legged mouse doesn't come knocking on my door looking for revenge.

I know that you are thinking that I made this little tale up for your amusement. Believe me, I didn't. It's the honest truth. I can hear you thinking, "You took nine shots. Isn't that a six shooter?" I have a 9 shot revolver. The real lesson here is not to take prisoners, and if you do, bring a shotgun.

So now the war on mousedom has escalated. I have researched and researched on how to build a better mousetrap. I built a bucket trap. Easy, affordable and according to the buzz on the internet where everything is true, it catches mice like crazy. 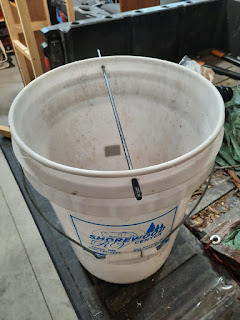 Start with a 5 gallon bucket. Drill 2 holes through it so that you can put a metal rod across the top. $3 dollars at home depot. 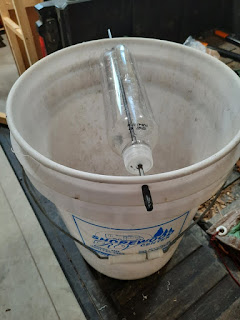 Take a plastic bottle and drill a hole in the cap and the bottom so that the metal rod goes through it. Make the hole a little bit larger than the rod so that the bottle spins freely. When the time comes, you will smear peanut butter all over that bottle. 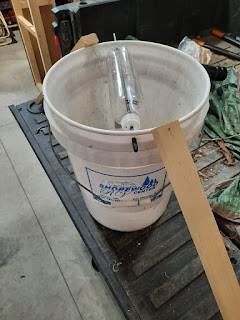 Then attach some wood ramps so that the little critters can make it to the top. Here I engineered it a little bit differently. I offset the ramps so that the mice can see and smell the peanut butter but can't reach it unless they take a leap of faith. Once they do, they will be quickly dispatched to Davey Jones' locker. Because in the bottom of the bucket you put a couple of inches of water in it. The mice hit the spinning bottle and fall into the water and quickly drown. I know. It's a cruel world. I knew we had a mouse by our wood pile so I set the trap up near it and then checked it in the morning. 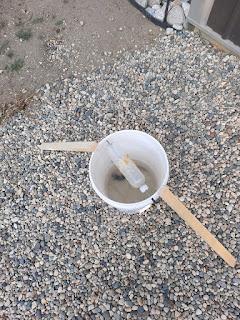 It worked. One less mouse that did not get in the house or campers. I know of a spot with lots of mice so I will be testing the trap there next. The only good mouse is a dead mouse. Another motto to live by.
Posted by MNdrifters at 2:53 PM 10 comments: