Jeep Safari is in the bag. It has been fun to say the least. This is the second Jeep Safari that we have been to. We didn't do any official Jeep trails but we did enjoy the rest of the events that have gone on all week.

I really enjoy the Jeep display that Jeep sends here. You can look at the concept cars and view or test drive all of the 2016 and 2017 Jeeps. I just wish they would produce some of the concepts instead of just teasing us with them.


Then they also had a 2017 Jeep Grand Cherokee. 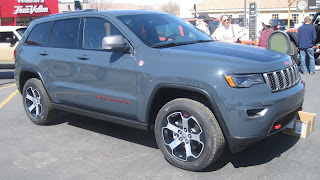 Then the vendors also had some tricked out Jeeps. 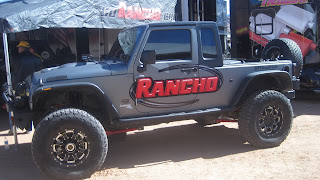 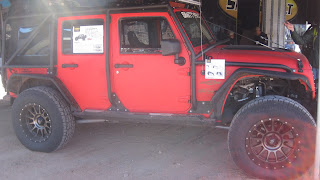 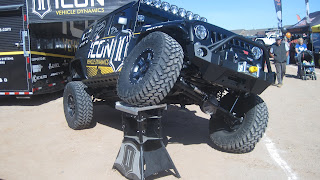 And of course there were all the other Jeeps running around town and on the trails. There were old ones, new ones, junkers and some that were just plain ugly. Of course most of the time I didn't carry the camera. But I did get a few. 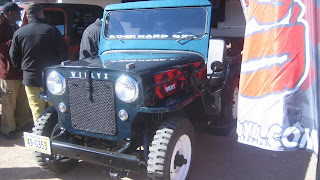 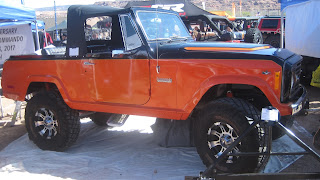 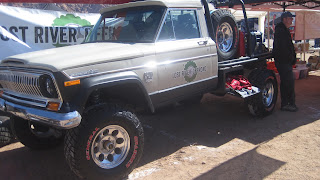 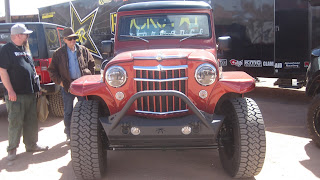 There were just to many to get pictures of them all. I heard that since this was the 50th Anniversary of Jeep Safari they expected anywhere from 40,000 to 80,000 thousand people for the week. We heard all kinds of estimates. I think it was on the lower side of that. We went out to the Moab Rim one day to watch them climb up to the top. No roll-overs but a few really struggled to get up there.
I told Lisa that it was kind of funny. Our Jeep was probably one of a few running around that was completely stock. No modifications at all. It really stuck out. All in all it was a good experience. I have gotten many ideas on what to do to our Jeep and what not to do. so hopefully you will notice some changes soon.

We have been busy here in Moab to say the least. We have Jeeped a little. Hiked a little. Biked a little. Plus Jeep Safari started Saturday. This little town is about to double in size.

So as you can guess, the hikes in Arches National park and Canyonlands are very busy. So we know hikes outside the parks that are lesser used. One of those hikes is The Hidden Valley.
The Hidden Valley is just off to the right. You have to climb through this boulder field to get up into it. This view is from the parking area.
The trail winds around and through the boulder field called "Barney Rubble". If you have ankle issues you may not want to try this hike. The trail is dirt and lots and lots of rocks. What you do get if you make the climb is spectacular views.
Once you climb to the top you enter the valley. Rock walls on each side. It is very nice. There are two parts to the valley. The front part you can still get some highway noise from below. The second part of the valley is very peaceful. We hiked a couple of miles until the trail turns into the Moab Rim Jeep Trail. You can hike all the way through if you want. 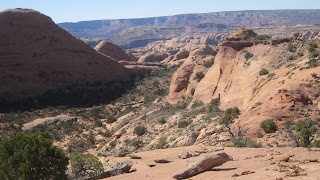 We enjoyed the scenery for awhile before we turned around and headed back. On the way back you get beautiful views of the La Sal Mountains. 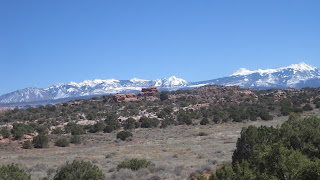 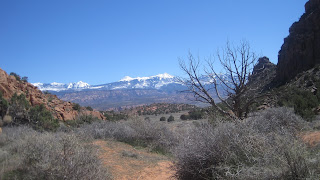 I just love the contrast of the red rock and the white snow capped mountains in the back ground. Well that is it for that hike. It is work to get up there and easy getting out because it is all downhill.

Now just some un-finished business from our stay at Quartzsite Arizona. When we tell people where we are they always say "Did you go to the bookstore?" I guess it is one of those things that is a must do when in Quartzsite. I did not go (and you will see why) but Lisa and some of the girls went. That is the owner and that is how he dresses every day. What happens in Quartzsite gets blogged all over the world. Free advertising for him. And he loves for people to take pictures of him.

It is Jeep Safari week so I will have a entire post about that next. 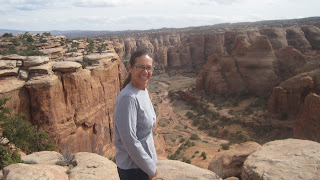 Yes we have started our work at the OK RV Park in Moab Utah. We really like this area and the work at the campground. Jeep Safari starts next week and we are really looking forward to that. It is early this year and by today"s weather you can tell. It was cool and cloudy and the wind had really picked up. Too windy to go for a hike. So we decided to take a Jeep ride up to Gemini Bridge.

You can easily reach the Gemini Bridge if you start from Hwy. 313 near Dead Horse State Park. But it is a little more challenging if you go in from Hwy 191 just outside of Moab. 4X4 recommended. You climb up the side of Mesa. 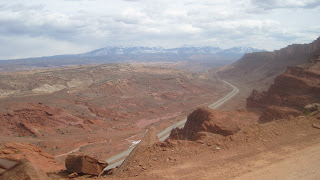 This is the view going up. You are looking down on Hwy. 191 going into Moab. We took this road in 2008. It has really gotten in bad shape. That's why the 4X4 is recommended. Once you get up there you are going across the top of a Mesa.

The views are always amazing in the Moab area and there are so many things to do. Then you finally get to Gemini Bridge. 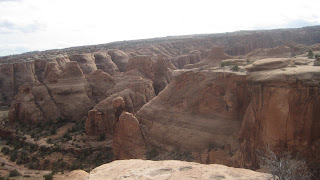 The overlooks are just beautiful. So that is all we have done since getting to Moab. We worked yesterday and today we played a little.

Exploring Lake Mead On Our Own 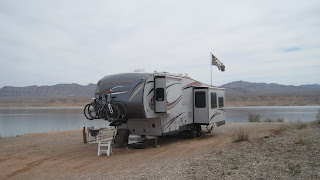 This was our spot right on the lake. Totally free camping by the way. The lake is probably 50-60 feet below our camper. Lake Mead is very low. In fact according to our GPS we were camping in water. The lake is 145 feet below it's highest point and 91 feet below an average year.
We drove into Echo Bay. It was one of the resort areas on the lake. It was pretty sad. The hotel/restaurant was boarded up. There were 3 camp grounds that were nearly empty. The marina is closed. The entire marina is just sitting on the bottom of what used to be water there. There is a boat launch but it is about a mile out into the lake now. 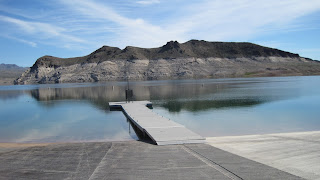 You can see where the water used to be from this photo. It is just amazing.

Enough about that now. We wanted to stay in this area to visit the Valley of Fire. It is a Nevada State Park and is known for it's red rocks which are actually ancient sand dunes. 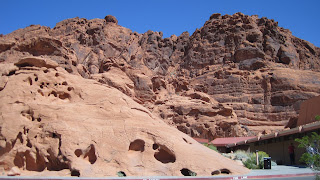 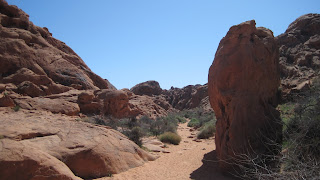 As hard as we try, the pictures just don't bring out the vivid colors that we saw with our eyes. The formations where beautiful. There are also many petroglyphs scattered throughout the park. Ancient Native American drawings. 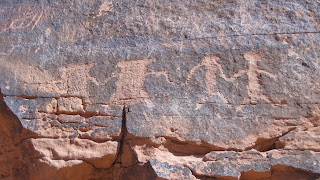 Another area we wanted to check out was called the Fire Wave. 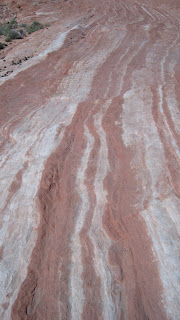 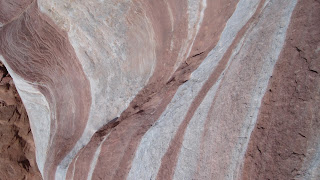 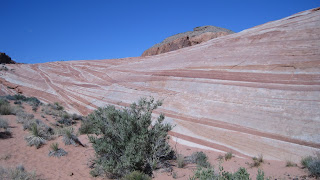 It was very neat. I thought maybe they should change the name to bacon strips to get more people to visit them. Because everybody loves bacon. After our day in the Valley of Fire, we went home to a beautiful sunset and anther great night on Lake Mead. When we were in Government Wash we heard coyotes every night. We haven't heard any hear but there are wild donkeys. You can hear them braying from across the lake. It was so quiet here that it was almost deafening. 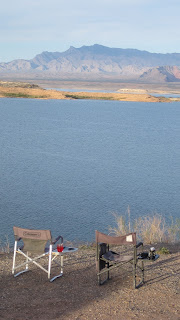 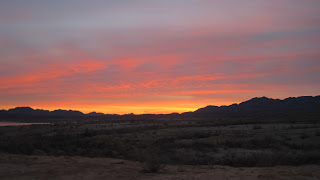 The next day we drove back to a red rock formation we had passed on our way here. Lisa likes to scramble around on the rocks. 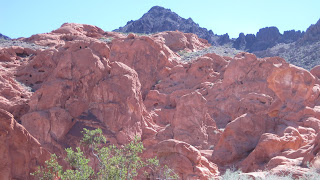 We a found a new friend.  We found a couple of Jeep roads. We only went down them a short distance because we hadn't planned to explore roads and were unprepared without a full tank of gas. So the next time we will have to travel down them to the ends. One road we did find some wild horses. That was another full day. So we went home to relax because it was our last night on Lake Mead.

We said goodbye to Lake Mead and got a early start to head to Moab, Utah. This state of Utah is so scenic. Even though it was a long drive, the scenery kept it interesting. 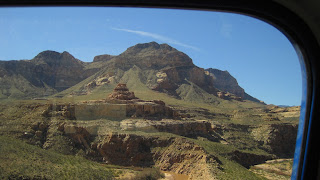 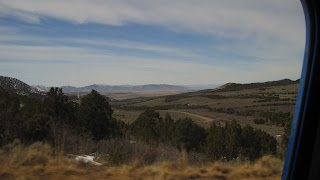 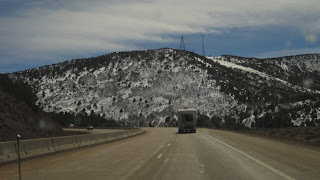 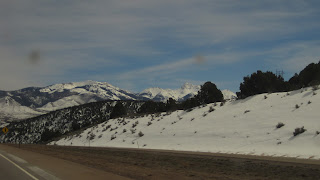 There is even snow at the higher elevations. We climbed over 7000 feet twice on the journey.

We made it to Moab and are anxious to explore many areas here that we have not seen yet. Also having the Jeep will make those explorations much more fun.