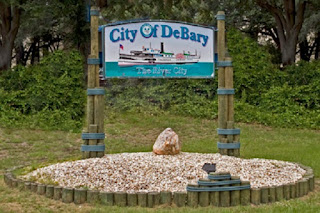 We pronounce it like this; "Duuuuuh Berry". It sits in Volusia County in the east central part of the state. North of Orlando and about 30 minutes from Daytona Beach and the Atlantic ocean. This city has only been incorporated since 1993. Not sure what that means down here because up north you are either a town or you are not. Not sure of why LaRay picked this area, but is a nice area. The only thing that we don't like so much is all of the random violence, and I do mean random. There are a lot of sirens all around. I told Lisa not to worry about those unless you hear a helicopter overhead. That's when you know that it is close.

We are familiar with this area since we have made many trips down here to visit LaRay. He was always a good tour guide, always showing us around and the many things to do and see here. Plus the "Mouse House" is only an hour away.

We have been in our new house for over a month now. I say "Our new house" because it is new to us but it is actually Lisa's and her sister Heidi's (I am just the freeloader). This house actually belonged to Lisa's father who passed away in September and now we have moved in to take care of his wishes as the Florida legal system grinds along painfully slow. With homeownership comes lots of upkeep. So every day we pick one or two chores a day to get done. We have been doing so much cleaning out and throwing away of stuff. Our garbage men I think hate us. One thing nice about this city is that there is no limit on what and how much you can throw away. So we are really taking advantage of that.

We have always told him how much we like his house. It has a nice floor plan and the back pool area is awesome.

We still have two more large projects to get done. The roof and the fence. Someday.

On a personal note. We have been going thru Lisa's fathers's belongings that he had in his closets, garage and in the attic. Going through old photos and papers and realizing that he was someone who didn't share a lot with his family. It is like finding out that we really didn't know him at all. We found all of his pictures from when he was in Vietnam. We knew he was there but have never seen his pictures of it. He loved to golf with his buddies. Roman and I have golfed with him many times when we visited. I found certificates of him getting "Holes-in-one" from different courses. I can just imagine the celebration after getting those. He also loved going to the Daytona 500 races. It looks like he would go with his buddies every year for about 10 years in a row. And I don't mean going and sitting in the cheap seats. VIP passes in the infield. What an experience that would have been. 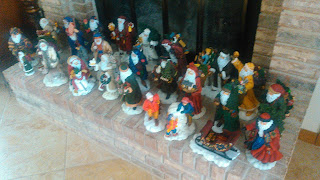 Pipka Santas. Apparently he loved those also because we found about 25 in his attic. The photos stuffed in boxes of his family and of him growing up along with high school yearbooks. We are just learning more about him now which we would have loved to talk about it when he was still alive.

That's it for now. We would like to wish everyone a "Happy Thanksgiving"!

The Joys of Home Ownership*

*Today's guest editor is being played by Beverly.

We arrived in Florida to check out Lisa's father's house and it faired pretty well after the hurricane. Lisa's sister met us there and stayed a week with us to help us go through the house and to start cleaning after it being vacant for 4 months. Some things were hard to do, like going through his clothes. In fact it was so hard to do, that we left it to do some time in the future.

We attacked other areas that needed cleaning out. Such as the garage and the shed (which we call the  roach motel). Every time I moved something in the shed, a roach would scurry to other hidden places. It really freaked me out. I guess they are really not roaches. They are called Palmetto bugs.

They are about 1 1/2 inches big. Don't get them confused with the American cockroach.


Can you see a difference? We can't. As my wise old father would say" You can put make-up on a pig, but it's still a pig". Not quite sure I know the whole meaning but I think that you can call a roach a Palmetto Bug but it is still a roach. All I know for sure is that Raid works on both.

So I got the shed cleaned out completely and sprayed everything with bug killer. I know it is working because every time I open the shed doors there are dead "Palmetto bugs", aka roaches.

It has been a couple of weeks now and things on the legal front are moving painfully slow, but they are moving. Things on the inside of the house are progressing along also. Lisa has been changing the decor a little. We are finding many things that can be donated or just thrown out. He had so many products that where past their expiration date. Not just by a month or two. I mean we are talking about years past the expiration date. We filled a whole garbage can just with that stuff. We have donated what we can to a Hospice thrift store so even after death he is still doing good.

So we talked to his insurance agent and we find out that he does have hurricane insurance. Whew! What a relief. That was some great news. Wait for it........Wait........Wait...... BUT.......Florida hurricane insurance doesn't cover 1) Trees that fall down unless they hit the structure. Really?! 2)Fences that blow down. Double really?! Apparently insurance companies would go broke if they replaced every fence that blew down every time the wind blew. 3) During a hurricane your deductible doubles. So now we have to determine if the damage is above the doubled deductible, and then is it even worth putting a claim in. Well bend us over and slap our ass's.

So with little help from the insurance company we will take on these projects ourselves. The first one being the tree. We need to get that removed so that we then can start replacing the fence. I am up in Minnesota as I write this so Lisa is taking care of the homestead. The tree came down and she sent me pictures. Yay! It was good to get that down because it was starting to rot and we thought that maybe it would come down during the next hurricane onto our house or the neighbors. 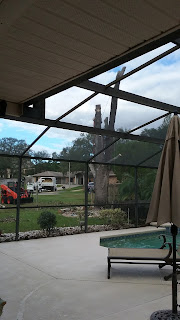 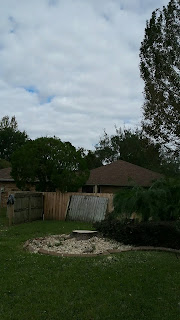 What am I doing in wintery Minnesota and not in warm, sunny Florida? Good question. I had my doctors appointment in September and I have been having terrible knee pain. So I went to a knee specialist and he thought I might have a torn Meniscus in my knee which the x-rays kind of saw that. Then Lisa's father passed away and we headed to Florida before anything else could be done. The pain got worse and nothing was really going on in Florida so Lisa scheduled an MRI for me in Fargo. So I jumped on a plane and headed north. Having an MRI is truly amazing. The pictures that thing takes are incredible. My knee doctor looked at the MRI and confirmed that I do have a torn Meniscus with some bone damage and of all things, Arthritis. Hopefully they can schedule surgery in December when we get back north for Christmas.

So I have been living in Lisa's mom's basement, (every mans dream I know). Turning it into an old school man cave. I mean who needs modern technology when you can bring history back to life. I set up an entertainment area with an old TV And VCR I found in the basement. For the young readers a VCR stands for "Video Cassette Recorder". Movies used to come on what they called "Video Cassettes".
Thrift stores and pawn shops have a ton of tapes. How ever the shelf life of VCR tapes is only about 20 years. So you are lucky if you get a good one and the selection is nothing modern.

If I want to listen to some music, I found a stereo Hi-Fi system with and 8 track tape player and a phonograph. Life is good in the basement. Why would I ever want to leave? Maybe someday I will get a Nintendo 64 or something. 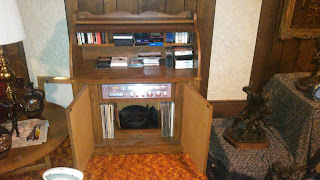 The stereo works very well and it has decent sound quality. I had the phonograph working for a little bit before it froze up. I googled how to fix it and am in the process of doing that.

They stopped making 8 tracks in 1982 so our selection here at Beverly's is limited to polkas and waltzes. LP records died out in the mid nineties and are making a comeback. LP stands for "Long Play" for the younger readers and the records were made of "vinyl". That's totally the "Bees Knees".

Until the next installment of the un-travelling travelers. I head back to Florida in a couple of days.