March has arrived and it did not come in like a lion. Temperatures quickly rose into the thirties, forties and even fifties. Quickly melting the snow we had and now making our driveway a muddy mess. I think we have decided that we need an asphalt pad in front of the barn so that we don't have to park in the mud. 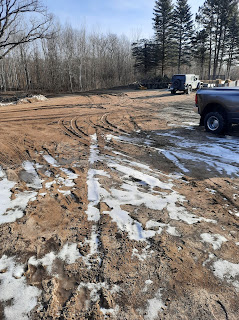 The work is coming along on the cabin. The big project for the month is our cabinets. Lisa found kitchen cabinets, which meant getting the kitchen ready for the install. We needed to get the sheet rock up before the cabinets went in. 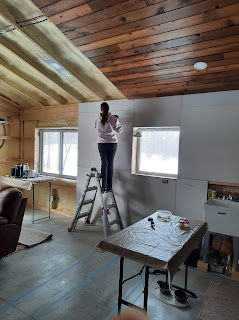 Since we were doing that we decided to also sheetrock the entire living room. 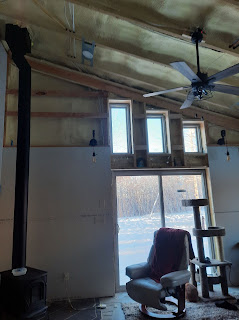 Not as easy as it looks because I am still operating with a half hand but more on that later. We also didn't want to have to work over the cabinets so we quickly put up the cedar tongue and groove on the ceiling in the kitchen. 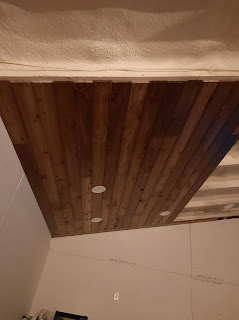 Lisa was a huge help in doing those projects. She even overcame her fear of the nail gun and was nailing the cedar as I held it. It was funny listening to her. You would hear a "POW" and then a little scream. "POW", scream, "POW", scream.
Finally the day came and our cabinets arrived. 2 days later and they were installed. They look great and we even found a table to match. The counter top will be installed next week so Lisa is a little giddy with anticipation. 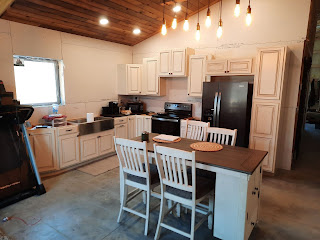 We had some shiplap left over from the bathroom project so I started doing a section of the wall in the laundry room. 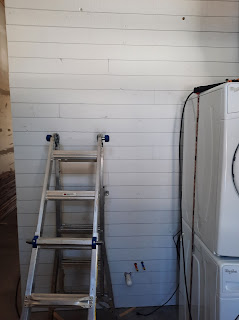 With that wall there now, I was able to take down the blue tarp that had served as our wall for months. I still had some shiplap left over (I guess I over estimated how much we needed for the bathroom) and started putting it up in the hallway. 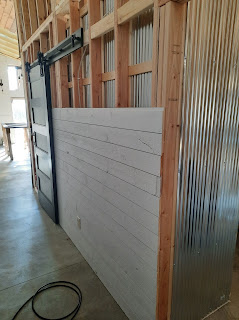 I finally ran out, so we ordered more. I don't know how much more of that we will do at this time because the prices have more than doubled.
Now to my finger. I have not seen any improvement so I went back to Orthopedics for a second opinion. A little late, I know. He looked at my finger and said that I need to see the hand surgeon. He told me I have a contraction of the finger. It is rare because instead of being bent, it is straight out. He then takes my finger and tries to bend it, which he succeeded. However I was in excruciating pain. He let go after what seemed like hours and it went back to the straight position. So now I go to Occupational therapy for more torture. We will see if I can stand the pain. I wonder if it is really worth the amount of pain that the cure causes.
Maybe in the future my cowboy name will be 9 finger McGhee.
Posted by MNdrifters at 8:04 AM 12 comments: