Our time in the "Q" is winding down. In fact as I write this we will only be here 2 more days and then we start moving on. The last two weeks haven't been as hectic as the first two weeks which was nice.
One Saturday the group went out to the desert bar. 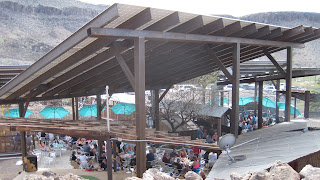 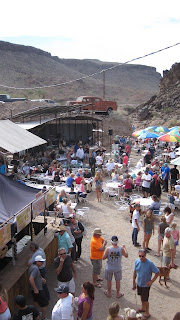 The desert bar is literally out in the middle of desert. No electricity. Everything is run on solar and they are only open weekends. They do quite a business as you can tell from the photo's. It was very busy.

Another day Lisa and I took a drive down to Yuma. We stopped in to the Yuma Territorial prison. It was an interesting piece of Arizona history. I would not want to be held in that prison in the summer. I think it was very stinky. 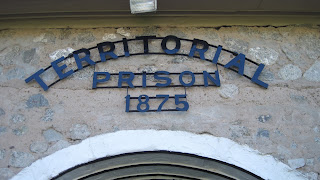 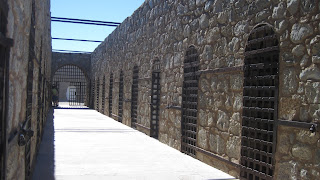 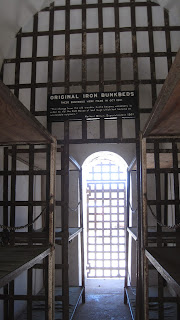 And yet another day Lisa and I did some more sight seeing around Quartzsite. We drove the Jeep up to a mine near here and noticed a trail to the top of a small mountain. So we climbed it and found the mountain with the flag and giant Q on it overlooking Quartzsite.

Finally Jim and Barb and Lisa and I piled into the truck to make a day trip out to Joshua Tree National Park. It is fun to see such a variety of landscapes that our national park system has. This one did not disappoint. The terrain is so rugged. I cannot imagine the Native Americans that used to call this place home and how they survived out here. With no XBOX or nothing. My hats off to them.

I also have to mention that Daisy (Jim and Barb's puggle) came over for a play date with Moose and Journey. Moose and Daisy get along very well. Journey, not so much.
One more thing. It was bound to happen with all the rocks around here. I got a rock wedged in between our rear daully. I beat on that thing with a hammer and it wouldn't come out. Finally had to get the Jeep and a strap to pull that little sucker out of there. Fun times. 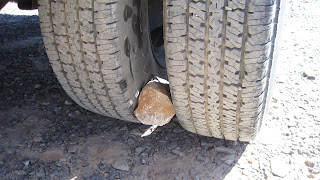 Finally I will say goodbye for now and leave you with another Arizona sunset. Now somebody get me a beer. I have to apologize right now before I even start this post. This will probably be my longest post yet. So lite the fire, get a cozy blanket and relax.

To be honest I really didn't know what to expect from Quartzsite. When we pulled up to this area, we looked around and said "Really?'(borrowing from Jim's slogans) Jim and Barb Nelson from Wisconsin of all places(Vikings, Packers kind of thing) where going to winter in this area. We met them in Florida last year, we really kind of hit it off. So we wanted to get out west where it was warmer and get together with our new or old friends, depending on how you look at it.

Looking around you just don't know what there is to do. You almost feel as if you are going to be bored out of your skull. Just sitting in the desert with no electricity and no television. Well it has been far from boring. Actually it has been very busy. I need a vacation from my vacation kind of thing.

The first thing we did when we pulled in was "Happy Hour". Sorry but I don't have a picture of the group yet. My bad. The group is always changing as people come and go all the time. There are always impromptu gatherings at someones rig.

After meeting the group, Jim and Barb took us 4 wheelin in our new Jeep. We really enjoyed that because it was a great way to build confidence in the Jeep.
Then the following day Lisa and I decided to do some geo-caching and exploring on our own. So we packed up the Jeep and headed into the Kofa National Wildlife refuge. We really didn't see any wildlife at all. The Kofa is a big chunk of the Sanoran desert. We traveled into the King valley area just to see what we could see. We found some old mines. Near the mines there were areas of so much scattered and broken glass. We couldn't figure it out right away but decided it was thier garbage dumps. Back in the day they didn't have plastic. Everything was in glass or tin cans.

We also found a graveyard. We were looking for a geo-cache when we stumbled in here. 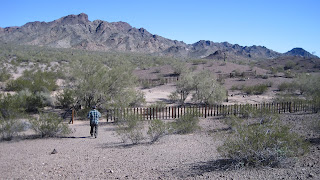 Another day, Jim and Barb took us to Palm Canyon in the Kofa NWR. It was a hike, and you can climb right up to the palms if you dare to. It is not easy but we did it.


The first picture doesn't really show the entire scope of the area. Those palms found a little area to grow in on the side of a canyon. It is quite a climb to get up and in there.

Then another day we went back into the Kofa NWR to look for some watering holes and caves. We found them after a long bumpy trail ride. The Jeep handled great.

In the caves there were these holes in the rock. Native Americans would grind thier flour here.

Then another day Barb and Jim (just to be different) wanted to go down to the Cibola NWR and look for waterfowl. So we went along also. We saw a lot of Canadian geese and Mallards. Like we have never seen those before. Jim said that the last time they were here there were a lot more birds. But not so many this day. 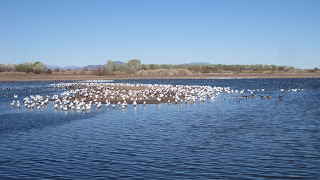 Super bowl Sunday found us at one of the local bars. The Grub Stake bar. I was just about the only person in there rooting for Carolina and every time I cheered for them, a lady at the bar in front of us would turn around and give me the stink eye. I thought whe might take me out back and stab or something.

We took a day to drive up to Lake Havasu and get the oil changed on the pick-up. We got that done and then called up some friends of my parents. So we went to Lunch with Bob and Judy from Moorehead Minnesota. They then gave us a little tour of Lake Havasu and then back to thier place for fresh squeezed orange juice and peach schnapps. Yummy! We spent a nice afternoon with them and then said our goodbyes and headed back down to Quartzsite.


Then finally Barb and Jim took us to an entirely different country. Los Algodoness Mexico. I should have said to an entirely different world because that's what it was. This little Mexican town caters to the Americans looking for cheap prescription drugs (which you don't need a prescription there), liquor, and dental work or eyeglasses. I was amazed at the number of people taking advantage of this. But when a crown costs $200 here versus $1600 in the states, why not. The border crossing is a little intimidating but not a bad experience. Make sure you have a Passport.  We ate a nice lunch and nobody got the trotts from it. We picked up our needed booze and pills and a few souvenirs and headed home. Dickering is a way of life for these people, so don't pay thier first price they quote you. Lots of people begging also and don't make eye contact with them because they will pounce on you to have you buy thier trinkets. One thing about the booze. You can only bring back one bottle per person.


That bottle of Kahlua was $7.50 and the Agave Tequilla was $9.50. I know that some are wondering about the price of Viagra. Sorry but I did not check that out. You can definately get it there.

Well now you are caught up with our activities. Like I said, I thought we would slow down here but that is not the case. Lots more activities are planned or being planned as we speak.