We decided to make a stop in the Black Hills of South Dakota. Such a magical and pristine place that has been held sacred by native Americans for centuries. I was amazed at the beauty of it all until we drove around a corner and saw the largest defacement of the land I have ever seen. 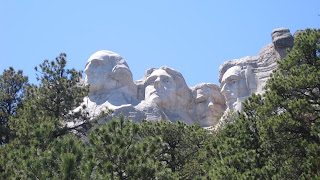 Mt. Rushmore
I am trying to be funny but it probably isn't working. The Monument is amazing, although a little crowded. The bright side is, is that people are enjoying the national parks. It was extremely crowded and my only gripe is that if you buy a national park pass, it doesn't work here. The attraction is free, but if you want to park your car it will cost you $11.00. Chips are free but the dinner is extra. (Paradisso reference.) 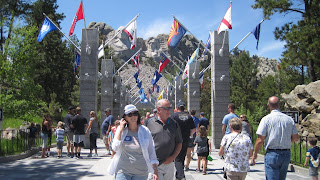 We also found a nice waterfall to explore. Spearfish falls. 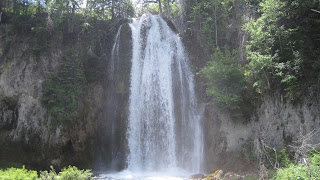 Now we are making our way to Minnesota. Home of the Mini-sodas.

Lisa and I where deciding on what to do yesterday and I googled things to do in Grand Junction. Driving this Mesa was number 1. So I told Lisa to put on some warm clothes because we are going to the top. We weren't going to be fooled like when we went to Cedar Breaks and it was 34. The top of this mountain was 56 so not to bad. So again we had a day of spectacular views. It left us wondering how many more amazing things are out there to discover. Hmmmmm.

Our son Roman came for a visit. We were just finishing up our first work camping job when he got to Moab Utah to start his vacation. He is young and athletic and had lots of activities that he wanted to do. He was going to wear us out because he wanted to be busy every day and he is here for two weeks. Yikes!

Day one- We picked up Roman at the airport in Grand Junction CO. His plane got in at 9 am and we are 1 1/2 hours away. So we got up early to make the drive. We picked him up and also a bike he bought at REI and headed back to Moab. Unloaded his luggage, loaded our bikes and went to a trail head to bike. Now if you drive into Moab from the north, there is a long 8 mile hill you go down. Well the bike trail starts at the bottom so it is a long 8 mile ride up hill. That part is not very fun for a fifty year old stud muffin like myself but going down is fun. You can practically coast for 8 miles.


Day two- Roman wanted to do some hiking that was strenuous. So we took him to hike the Moab rim jeep trail. That way he could watch some Jeep's as he was hiking also. We have done this trail before when it was 70 out. Now it is in the 90's. It made for a long hot hike. Another day that nearly killed me. 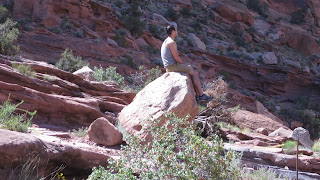 Day three- I arranged a Jeep trip with our neighbor Leyman. He took us on Hell's Revenge Jeep trail. It is one of the most popular Jeep trails in Moab. Lots of rock climbing and beautiful views. After the Jeep ride we went into Canyonlands National Park. We did the Grand View hike. 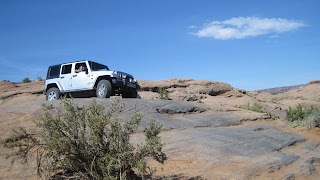 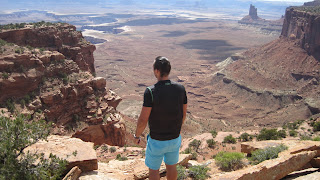 Day four- Arches National Park. We hiked out to Delicate arch and also Landscape arch. Lots of people out on the trails today. 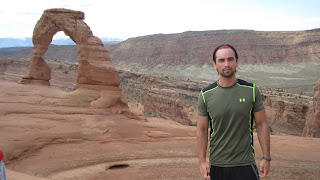 Day five-We drove to our next destination which was Pink Coral Sand Dunes state park. It is a very nice area but very popular with atv'ers. So if you go there be prepared for the noise. Here we wanted to be close to Zion, Bryce and Cedar Breaks. 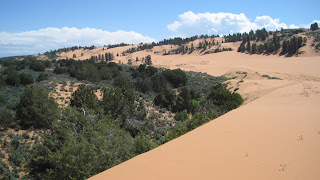 Day six-Zion. This was on Roman's bucket list. In Zion there is a hike not meant for the weak hearted. It is called Angel's landing. At one point you are hiking on a rock wall with 1000 foot drops on each side. To make it safe there is a chain that runs along the top there so you can grab on to it. Doing this while people are going up and down at the same time. Needless to say Lisa and I did some of the easier hikes that won't kill you. Lisa was quite relieved when we got his call saying he was done and coming down. 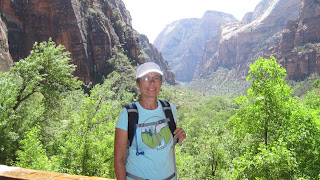 Day seven-Bryce canyon. This is a beautiful park. We chose to get on the shuttle bus all the way out to Bryce point (8300 feet elevation) and hike back to sunrise point. We figured there would be less people on that trail and we were right. Hiking among the formations is just awesome. 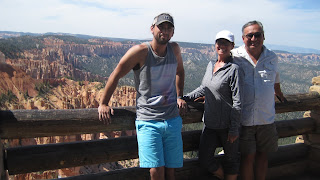 Day eight-Cedar Breaks National Monument. We didn't know what to expect from this one. We have never been there before, unlike Bryce and Zion which we have been to before. We left Pink Coral Sand Dunes and the elevation is roughly 4500 ft. and 80 degrees. So we made our way up and up to get to the top. Cedar Breaks is at an elevation of over 10,000 feet. The views were amazing but that day there was weather moving in. The temps were in the 40's. We were dressed for warm weather. So we took a quick look and then took the auto tour along the top. We exited the park and kept climbing up to a ski resort called Brian Head. Stopped for hot chocolate and realized that we were at 11,300 feet. The temp dropped to 34 and it started to snow. It was time to get off the mountain. 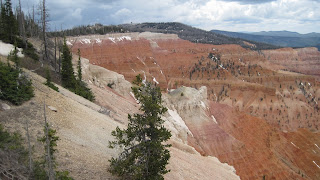 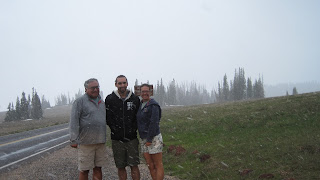 Day nine-Drive to Page Arizona and Lake Powell. Here we wanted to do Antelope canyon.

Day ten-We drove into Page to make a reservation for Antelope Canyon. They were all booked up that day so we made reservations for the next day. Now what to do? Off to the Grand Canyon I guess. It is only 2 short hours away. Last time we were here we did the North rim. So we decided to try the South rim. The sights were beautiful but I commented to Lisa that it was like going to Disney World though. There were so  many people. We just haven't been to too many places where there have been large crowds, except Disney. Oh well. 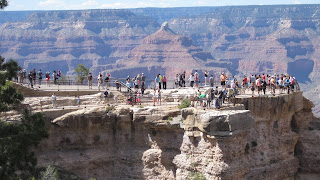 Day eleven- Antelope Canyon. This is a slot canyon, meaning that it is very narrow and carved by rushing water. It is on the Navajo Indian reservation so you have to book everything through them. It was a cool tour.  They take you out in the back of a pick-up truck to the canyon and then you are guided by Navajo tour guides. It is a must do when you are in the area. The light from above makes the sights inside the canyon spectacular. Then in the afternoon we drove over to horseshoe bend. It is a spot where the Colorado river creates a giant horseshoe and is very picturesque.  Also we went and did the Dam tour on Lake Powell. 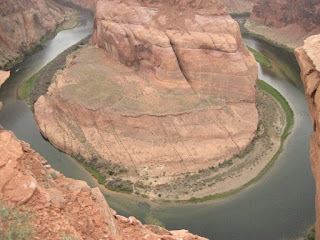 Day twelve- Drive back up to Moab. This was just an overnight stop on our way to Grand Junction.

Day fourteen-The Colorado Monument. Didn't know what to expect from this one either.  Never been here before. More spectacular views. There is so much to see in this small part of the country. After that we stopped in Palasade Colorado for some wine tasting and beer tasting. This is a big wine area so if you like that kind of stuff, here it is. I picked up a very good Concord Grape wine and Lisa got a Blueberry wine. 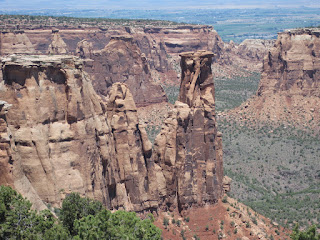 That is it for our Roman holiday. Roman left this morning. I hope he had fun. We sure had a good time with him. Even though in this lifestyle we don't see our kids all the time, the time we do spend with them is 100% better than what it was. Time for a frosty one.