Things have moved slowly here but they are moving. Our campground closed September 30th giving us no option but to move to our property. Technically we do have our sewer, water and electric hooked up. But not the way we had planned. Our sewer is in the ground. The electricians still had to run power to the pump and the alarm so we held off as long as possible to dump our tanks into it. Finally it had to be done. We couldn't wait any longer. Those that RV know the smell and that is what greeted the electricians when they had to open the septic tank to wire it up. Sorry electricians. (He,he).

The electricians did wire a 50 amp outlet in the barn. However we were outside the barn. Luckily I had a 30 amp extension cord and ran that under the door and across the floor. Starting October 5th, the electricians were going to be here for a week to wire everything up. The first thing they did was to install our 50 amp outlet outside.

Our water is another issue. Our pump is in the ground and works. However it is 100 feet away so I just had to get a long water hose. Problem solved until it turns cold.

Our fifthwheel is parked outside of the barn. We can't move into the cabin yet because the electricians need a final inspection on their work and we need the plumbers to show up and do something, anything. The plumbers need to install the boiler for the floor heat and the electricians can't finish their work unless the boiler is in. So the electricians have completed about 90% of wiring the barn and cabin. In all it has taken 2 guys 7 days so far to wire everything. I look at that job they did and think to myself, "If I did this myself, we probably would go up in flames". Lisa would say to me. "I need an outlet on that side of the room". To which I would say, "Just run an  extension cord over there Honey". Problem solved. "Oh, and grab me another beer while you are at it. Please". 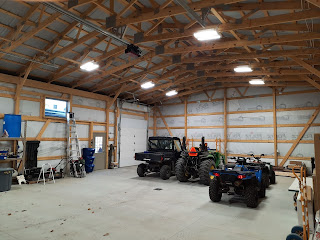 Tyler our tile guy came in one day and installed our hearth for our wood burning stove. We were going back and forth on what we wanted to do there. We were thinking stained concrete at one time or maybe just polished concrete. So Tyler came in and did some tile similar to what our shower looked like. It came out great. 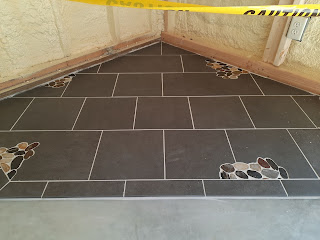 Minnesota weather is always hard to predict. We had a late thunderstorm roll through the other day. It can never just rain nice a gentle around here. No, we have to have torrential downpours. 3/4's of an inch of rain in about 30 minutes. Too fast for the ground to soak up, so we were watching the water run from all directions straight to our storm shelter. Lisa and I were out there frantically trying to divert the water away from the shelter with our shovels, getting soaked. (Dorks on parade) A little bit of water was high enough to get into the vent and inside the shelter. It could have been worse. 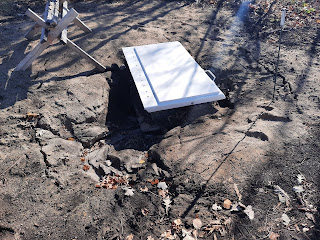 I got out there with the tractor and started trenching around it so that doesn't happen again, we hope. (Fingers crossed)
October 16th.
We have been watching the temperatures for quite awhile now. They keep getting lower and lower. RV's are not made for winter camping. We have iced up several times while we were on the road. We made the decision to move the fifthwheel into the barn hoping that it will be warmer for us in there. We have never had this in there before so Lisa rode on top to make sure it was going to fit through the door. 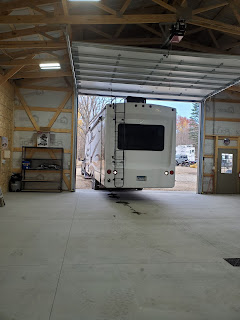 Once the fifthwheel was going in there the barn all of a sudden it looked small. That door is 16 feet wide by 13 1/2 feet tall. 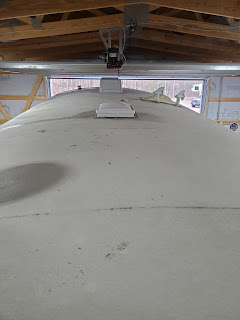 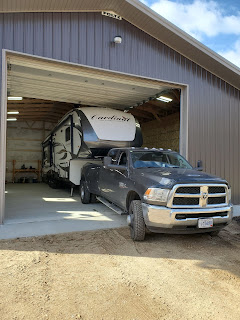 We are so glad that it fit. That would have been a giant "dorks on parade" moment if it didn't. 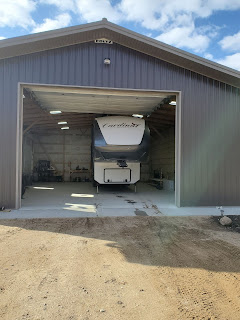 Snug as a bug in a rug. Good thing we decided to put it in there. The next  morning we awoke to this. 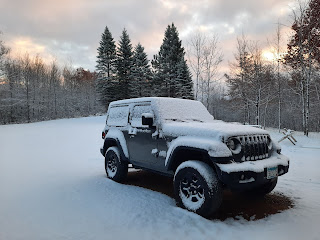 It melted when the sun came up. Mid October is way too early for snow here. It must be due to global warming. It snowed another night after that also. We are having highs now in the 30's and lows in the teens and 20's.
We can't wait for the plumbers. So I have started to put up some walls so that we can move in there soon. We have no heat in the cabin and we have our water line running in there so I hope it stays warm in there and the water line doesn't freeze.
October 21st.
As we sit inside the barn watching the weather go to hell in a handbasket, we have decided that a thin sheet of steel with a fabric layer next to it, isn't really enough insulation to keep the cold out and the warmth in. Normally this time of year, the temps are still in the 50's which would have been so much easier to deal with. Instead, the temps are in the 30/s and we have 6 inches of snow on the ground already with another 6-8 inches on the way.
On the brighter side, our plumbers showed up and started hooking things up. They said it would be a several day project. 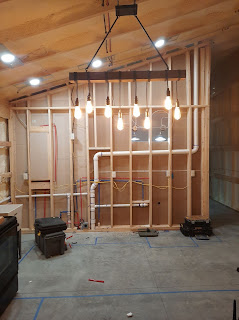 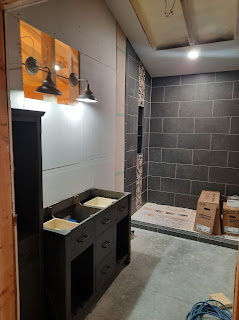 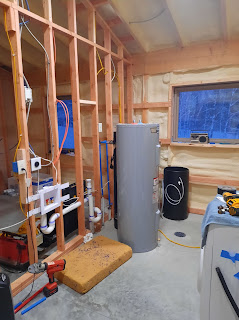 The utility room.
They came in on Tuesday to work. When they left their tools at the end of the day we knew that the were coming back. Yay! But after 2 days we still don't have a boiler hooked up yet so they won't completely hook things up until then. Darn. As I was secretly sobbing to myself, I looked up and saw this little fellow walking by. 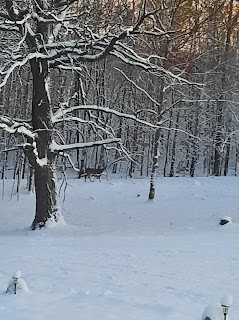 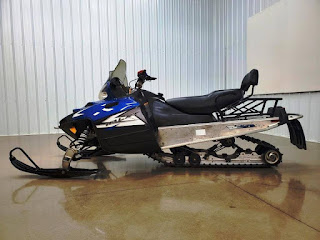 I could easily see myself getting hurt on one of these but it would be fun until then.
Which brings me to a this. Those that know me, know how athletic I am. One look at me and you can tell by my physique that I have a body of a Greek God. A Greek Sumo wrestling god. I have had blown out knees from being so overactive. Here is another example of my athletic prowess. I hurt my arm a couple of weeks ago. I just outstretched my arm and it felt like the muscles were tearing away from the bone. Plus I have 2 fingers on my left hand that are completely numb. So I tell my chiropractor about it and he looks at my arm. He does some movements that send shooting pains through my arm and a tear rolling down my face. He then tells me I have tennis elbow and carpal tunnel syndrome. 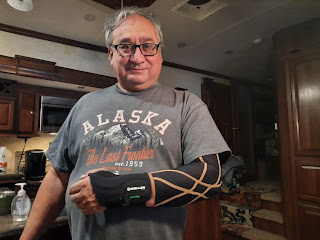 Tennis elbow? I am such an athlete that I can get tennis elbow without even playing tennis. WOW! I am awesome! Carpal tunnel syndrome? Just one step closer to the grave is what I say. Another possibility is that someone has made a voodoo doll of me. So who ever has that, knock it off.
That's it for now. In my next post I will tell you how to thaw out a frozen camper. Stay warm everybody.

It has been years in the making but it has finally arrived. We packed up and left the Barnesville Campground. This has been our home for 5 summers now and it was a little sad knowing that we would not be back there. 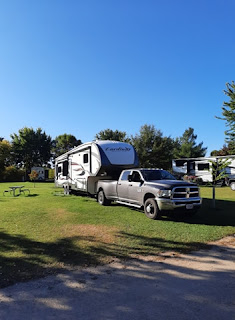 It was a convenient place for us to stay. Right between Fargo where are kids are and Fergus Falls where Lisa's mother is. It was a short drive out to our undisclosed super secret location. We moved our access road and paved it, but even doing that we thought it might be a little steep and we had never tried to get our fifthwheel up that. So today was a "make it or break it" type of day. Lisa was filming for posterity.
As you can see that it wasn't a problem. Jim and Barb thought we would scrape the rear end and I thought that maybe the nose cap would touch the truck bed. Neither happened. We went down our road and entered our new driveway, again with no problems.
We got set up alongside our barn. We will continue to stay in the fifthwheel so that we could work on the inside of our cabin. 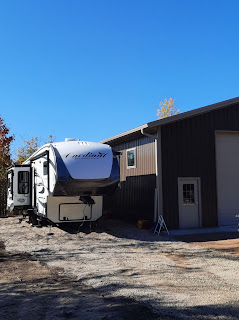 On a more personal note, I think this will be my last blog for awhile. I originally started this to share with people our adventures, the places we have discovered and the funtimes we have had. I had hoped to inspire people to get out of their comfort zones and explore this great country of ours. I know we did. But since we have no travels in the works until maybe next summer, I think that this blog would get boring. I don't plan on cutting Lisa's leg with a chainsaw every month for entertainment value. Unless she lets me.
So if you really have a hankering to hear about our silliness, you can always go back and start from the beginning. There are 239 posts in all. And don't worry, I will update everyone on the house as we continue to work on it. It may just be monthly rather than weekly.
So until then, "Live long and prosper." 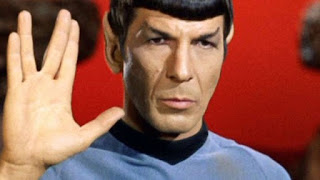