Hunkered down in our superest, secretest undisclosed location is going well. It is so secret that spy planes and spy satellites can't find us, thanks to being inside. 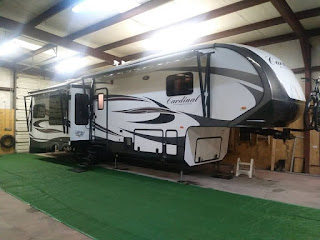 The tinfoil hats are working wonders. Except one time. I went to bed and it fell off and I then had the craziest dream. So don't tell me that they don't work. In fact that reminds me that I need to put a chinstrap on mine.

"Dino. Dino. DINO!!!! It's me Santa. I have a job for you. I want you to go someplace secret in Texas and spread some Christmas cheer to some Texans." Santa said.

"You are. You must be in a super secret undisclosed location then. Anyways, get back on point. Go see one of my helpers and spread Christmas joy to all, Santa out."

"Lisa, wake up. I just had the strangest dream and why does my mouth taste like candy canes?"

So we found Santas helpers. They run the "Polar Express" in northern Texas.
What the Polar Express is, is they have trams that go by the "Festival of Lights" and people pay to ride the slow moving trams and view the beautiful Christmas decorations. It's becoming a Christmas tradition here and we have agreed to drive for them. It doesn't start until Thanksgiving and runs through Dec. 29th. 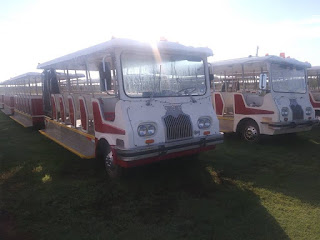 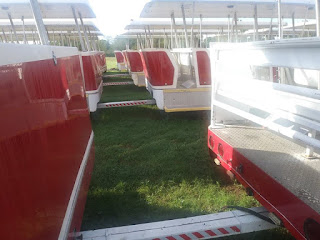 The trams are ready. They have been painted red and white and Christmas lights have been strung on all of them. I am glad I didn't get there for the painting. They look great.

What can we do in the meantime?

"There are some big crowds that form so what we are going to do first is build a queue line management system for crowd control." Mike said.

"What!? Those are some pretty fancy words for a rope line." I said.

And build it we did. It started with metal that needed to be welded together.
Then ground down for smoothness. I was given the grinder and put to work. I had Lisa try grinding one day and now she has given the grinder a new name. She affectionately calls it "The Tickler" which is a story for telling around the campfire. 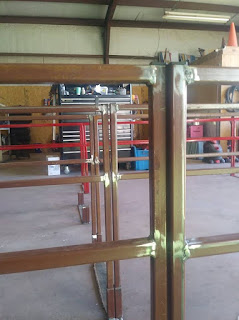 I was grinding so much that my hand was going numb. So numb that I almost couldn't hold my beer. The key word being almost. Once done they then needed to be painted and then bolted together. 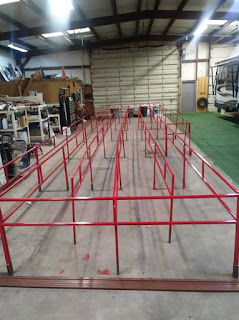 The final product. It looks great. It took a team of 4 of us to get that built and it will hold well over a 100 people. They get some crazy lines for the Polar Express. It is that popular.

"I have got to get a chinstrap for my tinfoil hat."

"I want you to replace a sewer line. The old one was crushed." Santa said.

"How is that spreading Christmas cheer?" I said.

I have never been a technician in the arts of sewage management butt (pun intended) I was willing to give it a try. Mike rented a miniature backhoe and we started tearing up the yard. First thing we accomplished was to break the water line. Just to make it more interesting.

The problem we had was that little backhoe could have been bigger. This is the north side of the shop and doesn't ever get any sun so the ground does not dry out, especially with all of the rain lately. So instead of moving dirt, we were moving mud. Heavy mud. 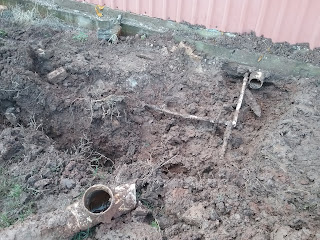 What a mess. I can now cross shoveling mud off of my bucket list. 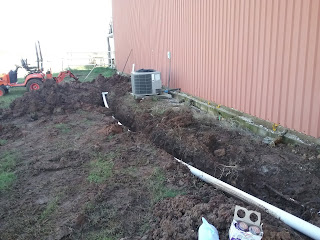 Our new sewer line is in the ground. 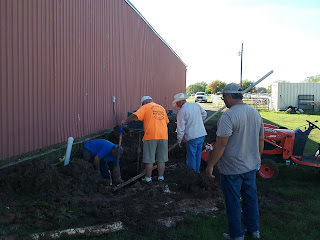 Now it looks like a union job. One worker with 3 supervisors. We finally got the new line installed and repaired the water line. We can finally empty our pooper. Good call Santa!

It has not all been work. Mike and Robin have taken us out a couple of times and showed us around their town.They took us to a local watering hole called P2. Not sure what that stands for but there is an area were you can park your vehicle and the waitress's will come to your car and serve you alcohol. 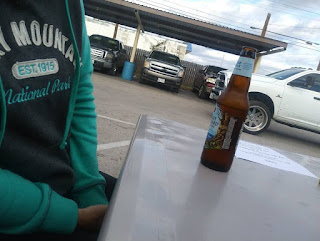 Those trucks under that overhang are enjoying adult beverages right inside their cars. Awesome! We also went to the Lazy Dog Saloon. A very local bar. The owner was a friend of Mike and Robin's. He was giving us shots. Like the Crowndog and Snicker. That was fun. 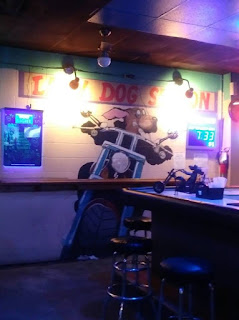 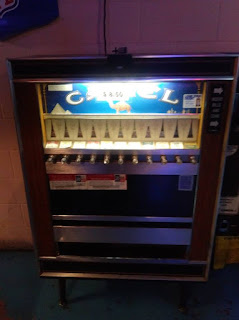 They even had a working cigarette machine. I haven't seen one of those since my childhood.

So we have been busy working and having some fun. Lisa has even spent time taking Moose for some walks. 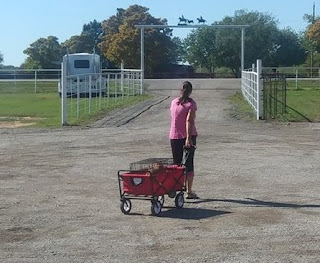 Our water tank has been ordered and hopefully enroute. In the day and age of 2 day shipping why would it take so long?

What's next for us? Only Santa knows.
Posted by MNdrifters at 9:30 AM