First Time Being Abducted by Aliens

There I was, a young man living deep in the woods of the SSUVFL. Some might say that I was the ultimate specimen of manhood. A perfect mix of John Wayne, Clint Eastwood and Zac Efron. That's why it was not unusual for me to take a nightly 10 mile hike in any kind of weather. If you know me, you know that I am the epitome of health and fitness. What was unusual that particular starry night was that way off in the distance I saw a shimmering light. As I watched the light, it began to get closer and brighter. Could it be an Unidentified Flying Object? Otherwise known as a UFO. 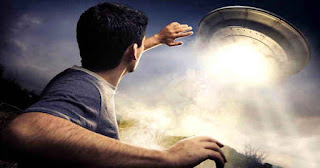 Preposterous I know, but bear with me. Before I knew it the light was directly overhead. They say that most people facing a life or death situation such as that, a fight or flight response will kick in for self preservation. I would like to add that there is also a third type of response. That is stupid dumbfoundness. As I stood there looking up at the light I could feel a certain warmth running down my leg. I had a sensation of being whisked away. Things after that are kind of a blur but I can relate to you a few of the details of my abduction.

I recall looking up at a white ceiling with some sort of apparatus up there. I could feel my body being tilted at an odd angle while something grabbed my left leg. Putting some kind of boot on it and then being tied down. Then the same happened to my right leg. My arms were grabbed and tied down also. It was kind of scary being aware of what is going on but having no control of anything. I closed my eyes hoping that when I opened them again it would all be over, but when I opened them I was still there. Again I closed them and this time when I opened them it was over. A blink in time.

I relate that story to you because once I got into the operating room, that was the closest thing that came to mind about what happened. It was surreal to say the least.

I am ahead of myself so let me start from the beginning of that grand and glorious day. We got the call the day before to let us know when to show up for surgery. 6 AM. Alarms were set and we were as prepared as possible.

Winters in Minnesota can be challenging at times and of course when it comes to something like this Mother Nature just had to make it more interesting for us. Maybe it humors her? I don't know. The drive from the SSUVFL to Fargo promised to be snowy with blowing snow, dropping temps and ice covered roads. So we awoke at 3 AM and hit the road at 4. Top speed for our journey was a whopping 50-55 mph. 80-88 kph for our Canadian friends. It was a white knuckle drive for sure as in several areas we started to slip and slide.

We eventually made it. Got checked in and waited. They hustled us to the pre-op rooms where they wanted me to strip down to nothing. Okay. Lisa, cue the music! After the show was over I was glad to have made a few bucks. I received another Covid test because having one 6 days away was too far in advance. It had to be within 5 days of the procedure. Oh well. I am not responsible for what they find up there.

It came back negative so I was cleared for surgery. We said our goodbyes and I wondered to myself if Lisa was going to visit Dr. Hot Bod. He is one of the orthopedic Dr.'s I've seen and works downstairs. It's okay. I've seen Lisa's dermatologist who I call Dr. Soft Hands so I guess we are even.

In the operating room I was propped up so that they could do a spinal block on me. As I was sitting there, there was a table full of all kinds of torture instruments. I made a comment to the nurse standing in front of me so that I would not fall off the table, "Oh look, there's the hammer, I've heard about the hammer." 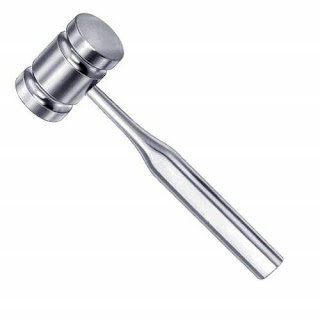 She said to me "Don't look at that stuff." We both looked longingly into each other's eyes as we shared a moment. I think some of the meds have already started working.

A spinal block is where they inject a spinal anesthesia into the spinal fluid. Never having one before I assumed it was one injection and that was it. Stab after stab I felt in my back. Over and over it went. Name, rank and serial number started going through my mind. Finally the main anesthesiologist came over and she tried another 4 times until she got the needle in. Worst experience of my life. Apparently they kept hitting bone, cartilage and nerves. Lisa later on counted 14 needle marks. Fourteen. When they hit the nerves I nearly passed out. After that, that is when I felt like the aliens took over.

Up in the recovery room I really had to go #1 and I was not going to do it in a bed pan. I have way too much pride for that. So I had the nurses come in and get me out of bed to get to the bathroom. Once there, performance anxiety set in as they were outside the door along with Lisa and what sounded like half of the hospital staff. Mission aborted. After everyone left for a while, I swallowed my pride and did the deed in bed. After a few times I was getting pretty good at it so to challenge myself, I started to add a distance factor into play. Note to self. Don't do that. That was going to be the alternate title of the blog. "First time peeing in bed."

I was up in recovery until the next day. We were waiting to get released and also watching the weather as more snow and wind was going to move through. Mother Nature just toying with us some more. But this time Lisa had to drive us home. Another perilous drive and we were back safe and sound in the SSUVFL.

Lisa is taking great care of me. We have developed a rhythm to get in and out of bed. It is a two person job for sure. Moose likes to sit with me all of the time. 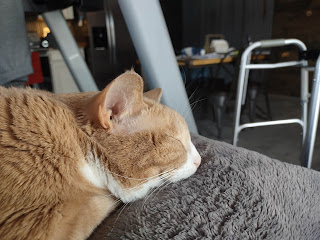 Lisa is also outside doing the snow blowing. After all these years she kept telling me she didn't know how to use a snow blower. I sure fell for that one. 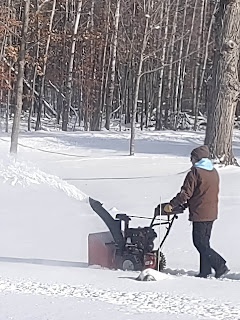 What a woman. Thanks so much to our neighbor Chuck ,who also came over and plowed the long stretch of our driveway with his ATV.
So until next time.

Posted by MNdrifters at 7:38 AM