Battle of the Busch and Other Hairy Situations

I am happy to inform you that this post is not about bikini waxes gone bad. (Unless you really want to hear about that). It's not about us trekking the jungles of the Amazon (I have already wrote many blogs about that). It's about us visiting Busch Gardens in Tampa. This theme park is modeled after the "Dark Continent". Africa. 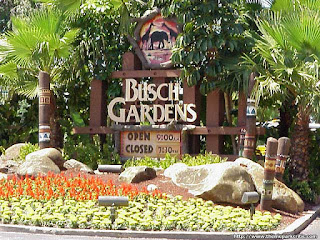 We have never been to Busch Gardens before so it was a nice surprise to go and check it out. Since it is themed after Africa, the areas of the park where named after different areas of Africa. Like Egypt, Nairobi, the Congo and others. There are plenty of animals scattered throughout the areas along with various plants and lots of birds. 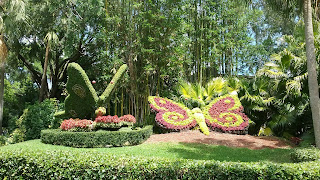 They also have many roller coasters and other thrill rides for adrenaline junkies. There are also many kid rides for the little ankle biters if you want to bring them along also. Nothing says "you are on vacation" like a bunch of screaming and whining kids and the parents that yell at them. Good times. We however are not into the thrill rides all that much anymore. We do like rides like Disney has, like Haunted Mansion, Pirates of the Caribbean and the Jungle Cruise. All the rides at Busch Gardens are pretty much vomit inducing. We did find our new favorite coaster after checking out all of the others. We then gave them all a hurl factor ratings and found the one that won't make us blow chunks. That coaster was called the "Cheetah Hunt".

It sling shots you in 3 different areas. It was very fun. We even did it a second time, that is how much we liked it. It was rated 20 out of the top 50 coasters in America which is pretty darn good for us to go on.

It was a very enjoyable day at Busch Gardens. We would definately come back here again someday.

One day last week we declared a beach day. We heard about Venice Beach in Florida (not the California one). Apparently shark teeth are prone to wash up on the beach. It is kind of famous for that. So armed with my scoop for metal detecting and our swimming trunks we hit the beach. I dredged and dredged and excavated about 10 cubic yards of sand and found nothing. Just my luck.
It was a beautiful day though. The pelicans were feeding just offshore. It was interesting to watch them as they dove into the water to get the fish. 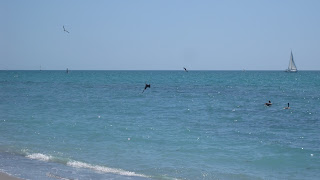 It was so nice we both just got fried. Not really realizing it until we got home. Oops. 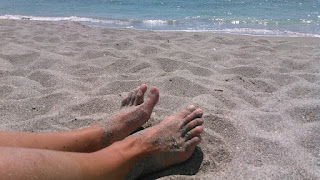 Our daughter Kendra and her friend Vicki came out for spring break. We saw them a couple of days but they spent most their time at Disney. It was nice spending some time with them because we have not seen them since August of last year.

And if you didn't think we were busy enough, we were able to squeeze in a dinner with Lisa's uncle who lives in Palm Harbor Florida. We ate at Bon Appetit right on the gulf.

We have been busy the last couple of weeks with more to come. However it has gotten very hot here. Lisa is in heaven because of the heat. I am in the opposite area.

One other note of interest. Now that it is April, a great migration has begun. This is comparative to the wildebeest migration of Africa, or the Elk herds moving into the mountains. This is the great Snobird migration. Snobirds moving back north for the summer. Our park is getting empty as I am sure most parks in Florida now are.

Stay tuned for some high flying action next week.