Day 7. Our drive today was going to take us from Jasper, Alberta to Hinton, Alberta. We were then going to take Hwy 40 to Grande Cache and then to Grande Prairie which was our destination for the day.

We awoke to freezing temps in Jasper. Thankful we were not in a tent. We had our standard 2 cups of coffee and then got ready for the drive. Slides in and unhooked we drove into the town of Jasper for fuel. Since we are using cash we have to guess how much fuel we will need. Plus we have to try and figure it out in litres and price per litre. I've got it figured out that if the tank is below half its $70. Half is $60. Above half is about $50. We are always filling at around a half a tank because you just never know up here.

We hit the road with high hopes of seeing some critters. We checked the weather and everything looked good. We could see some clouds up on the mountains and it looked like it was snowing up there. Nothing hitting the valleys.We got to Hinton, Alberta and turned left onto scenic hwy 40 to Alaska. The clouds started to thicken that direction and knew it was only a matter of time before we ran into it. 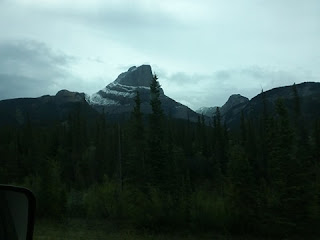 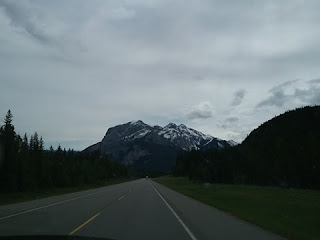 So we drove to Grande Cache, Alberta and into the rains. Hwy 40 started out as a narrow road in rough shape. We were warned about the roads up north and so we didn't think anything of it. It did get better because they are in the process of widening it and resurfacing it. I would say that 70 percent of the road is in good to great shape right now. The speed limit for the road is 100km/h. 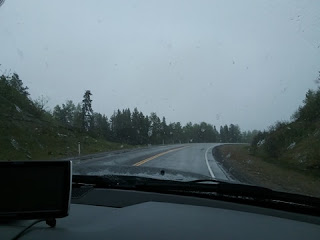 I kept my eye on the temp outside. It was slowly going lower. The rain turned to snow at 2C and it even got to 1C. I was debating if we should pull off for the night and let it pass because we didn't have cell service and couldn't check any weather forecasts. Remember when we left we didn't have anything in front of us. 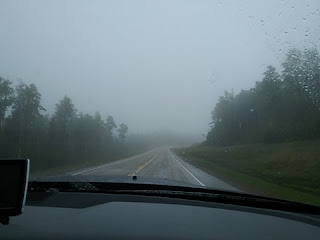 We just kept on and eventually came out of it and out of the mountains. By the time we got to Grande Prairie it was sunny and getting warm. We went to the visitor center to find a campground. Stopped at the liquor store and fueled up again. 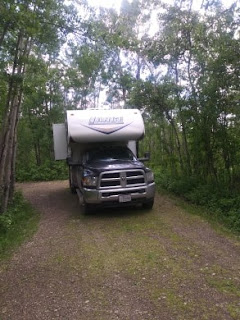 Our campground we chose was a Provincial Park Saskatoon Island. $27 a night with no hookups. But one good thing about this park is you can get as much free firewood as you can burn. 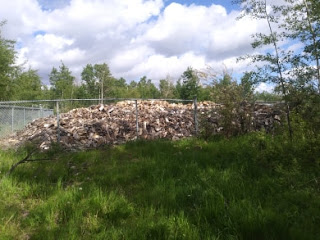 They have a huge fenced in area full of cut and split wood. There is a sign there also that says if you take the wood out of the park it is considered stealing and will be dealt with. They are very serious about not wanting people to move firewood. I don't blame them after what we saw in Jasper with the pine beetle infestation.

So we are refreshed from our night of rest. The farther north we get the later the sun sets. Here it is around 10:30 now. How filthy did the truck and camper get? 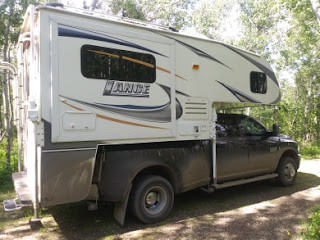 That part of the camper that hangs down in back is supposed to be white. We hope to find a truck wash at our next destination which is Dawson Creek BC.

"Gladys, put your scivvies on and let's go!"

Day 8. We planned to stop in Dawson Creek, BC for 2 nights there. We got going early and arrived in Dawson Creek before noon. We went through a time change also. So we pulled into Wal-mart and restocked our supplies and then went to a Casino for lunch. Lady Luck was not smiling on me so we decided to go to the Mile 0 of the Alaskan Highway. 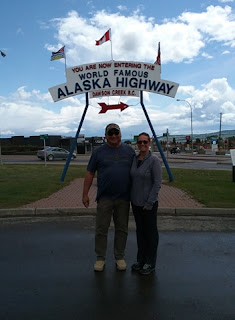 Since it was early we decided to keep heading north. The next planned stop was going to be in Fort Nelson, BC but that was farther away than we wanted to drive by that point. So we found a Provincial Park halfway between and stayed there. We are liking those little parks and this one was only $20 a night. It was called Bucking Horse and it was along a river. 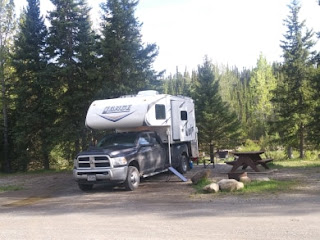 Day 9. We drove through spotty showers all day and we were hoping to wash now when we got to FT. Nelson. Because we are really filthy. But that is like a badge of honor up here. Everyone is filthy. The drive from Bucking Horse to Ft. Nelson was only about 180 kilometers. A short day. 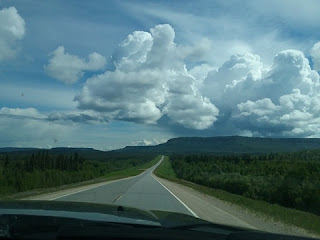 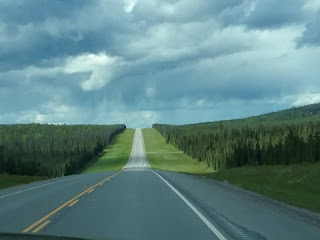 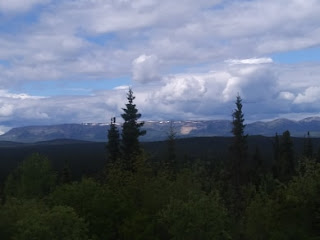 Once we left Jasper we got out of the mountains. Now that we are in Ft. Nelson we will be getting back into them tomorrow. We picked a private campground in Ft. Nelson because I wanted to wash the rig and we needed laundry services. Triple G Campground had all of that so we are staying a night here. When we checked in we asked the lady at the desk that we wanted to pay for a wash. She asked if we were going north, to which we said we were. She told us not to bother because it would be a waste, we are just going to keep getting dirty. At least she was honest. In fact as I am writing this it is raining on us now.

Critter count-1 black bear we think. It was like a mile away.

We are a little surprised at the lack of animal sightings.

Once we turned onto the Alaskan highway, the road has been great all of the way to Ft. Nelson so far. We did however hit one bridge approach that wasn't marked as being rough or nothing. No warning at all about it. We hit that thing going over 100kph and it was horrendous. That was on Hwy 40 between Hinton,AB and Grande Cache. We didn't notice till later but we actually bent the passenger side corner of the pickup camper. 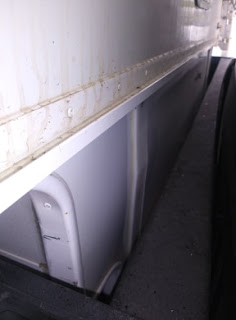 See where it is bent? That was a hard hit. So now we are slowing down for every bridge approach.

One more thing. We stopped to get a solar panel just to charge the batteries a little bit. So I hooked it up at Bucking Horse and it worked great. So I left the alligator clips on the battery thinking that should be okay. We left the campground and stopped for fuel. Well, Gladys has a bladder the size of a tea cup and she went into the bathroom and pretty soon I see her come running around the camper. "There's smoke in the bathroom!" It turns out that the alligator clips I left on somehow shorted out and started melting. 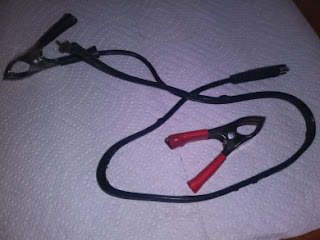 So for the next 100 miles, we pulled off at every pull out so that Lisa could check to see if we were smoking or on fire.

Well the rain finally stopped and this is what the back of the camper looks like now. The rain doesn't even rinse it off at all.

"Gladys! Get your bikini on and wash the rig!"
Posted by MNdrifters at 4:08 PM