Spam-1. irrelevant or inappropriate messages sent on the internet to a large number of recipients.

2. Trademark, a canned meat product made mainly from ham.

As it so happens, every now and then, we sneak out of our super secret undisclosed location. This time to discover the origins of Spam. Not the annoying email type of spam but rather the food that saved the world type of Spam. To do that we had to venture down to a small Minnesota town in the southern half of the state. Austin, Minnesota is the Spam capital of the world. 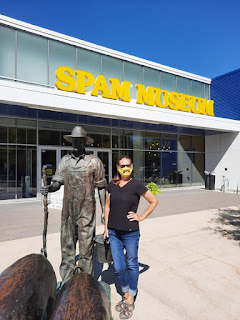 We found the museum easily and we were going to go in but there was a sign on the door that said we had to be masked. As you can see from Lisa's expression on her face in the above picture she was not happy about it. It was Hormel's company wide policy that everyone should be masked in their factories including their museum. I just shrugged my shoulders and said "When in France....." So we went in and the admission is free. Perfect! Lisa's attitude changed for the better after that. 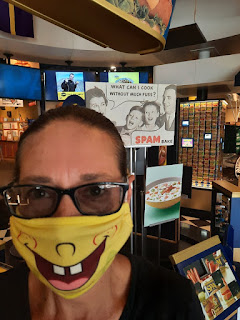 She is smiling now. The museum was done quite well with many interactive exhibits and history. It was small but really, how much can you talk about Spam. 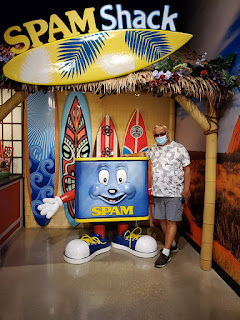 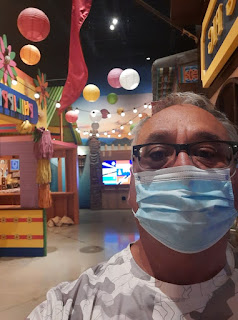 In this area it was devoted to different countries and the impact Spam had on those areas. Also with specific types of Spam made just for those countries which I wish they would sell those varieties in our country. I also was able to download different types of recipe's for Spam. Like this one. 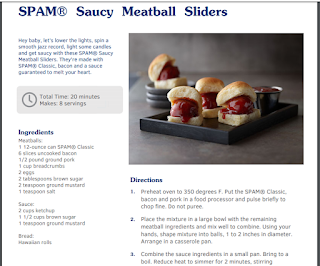 Spam was introduced in 1937 and gained popularity worldwide after WWII. By 2003, Spam was sold in 41 counties on 6 continents (wikipedia).
It was interesting to see the conveyor belt moving with the cans overhead. It was mesmerizing. After the museum tour we went into the gift shop. I had high hopes that they sold all of the varieties of SPAM there but they didn't. I did get a few that I have never seen in stores though and am anxious to try them out. 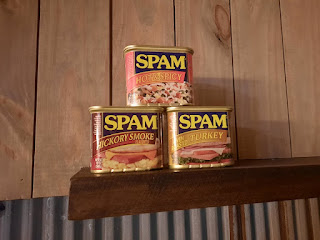 I have high hopes for them and I hope that I am not disappointed. It was a fun day for sure.
Now I must divulge the real reason for us heading to southern Minnesota so that some readers who are from Wisconsin/South Dakota can stop reading now and not waste their time any further.
The real reason we went to southern Minnesota is that I had another visit at the Mayo Clinic in Rochester. Again I have to admit it is an amazing place. The first visit was for a initial consultation. From that they devised a plan to tackle my hand situation. So this visit was for a battery of tests to find out what is going on.
First test of the day was going to be an EMG, short for Electromyography. There are 2 parts for this test. First part of the test is to apply electrical stimulation to muscles to gauge the nerve response. This is done by a nurse and she records the results on her computer. In lay-mans terms it is electroshock therapy. I lay down on the bed and she start to apply shocks to my hand. Starting with light shocks and gradually increasing the intensity until my hand is flopping around like a fish.
Thank God I was in the military for 26 years because my military training kicked in instinctively. As I was laying there being electrocuted I told her that the only information she was going to get from me was my name, my rank and my serial number. She did my hand muscles on my left hand and then also at the elbow. Then she wanted to do my right hand for comparison. Oh goody. That took about 15 minutes and then she was done. First half of the test was done. Now the second half which is worse than the first.
This test is where they stick NEEDLE electrodes into your muscles. I repeat, into your muscles without any numbing or anything. Just stab, twist and twist again. So a doctor comes in and says to me "We will get the information we want, one way or another, heh, heh, heh." He starts under my thumb and stabs that electrode into the flesh. Then he starts turning it around to get a good signal. On the computer it looks like a graph and he wants a straight line on it. He says to relax which is hard to do with something stabbed into your skin, then he says to flex that muscle, again hard to do, but as you use the muscle the electrode picks up the nerve activity which makes the graph go crazy. Then onto the next area. The backside of my thumb. The whole thing is repeated again over and over again all the way up my arm and into my neck. I'm not sure if I passed out or not but when he was done he smiled and said they now know the location of the ammo dump. All in all, I counted the stab wounds and there were nine.
I had this test done in Fargo in November so I kind of knew what to expect, but at Mayo it was so much more thorough. They did 2 to 3 times more testing there than Fargo did. I hope it was worth it and that they can tell me something later on.
The next test to be done was going to be an MRI of my forearm, wrist and hand. They made three separate appointments because it was 3 different areas. They called me back and told me to take off my clothes and put on a gown and then they installed an IV. I have not had a IV for an MRI before so add another stab wound. She looked at the orders and said, "Wow, your going to be in there a long time". That's reassuring.
The MRI machine only looks at about 10 to 12 inches of your body at a time and since I was having my arm done it was going to take awhile. Plus they were going to do a MRI with contrast they called it. Which is like doing another whole MRI. I asked what the contrast meant and they said they do a complete MRI. Then they inject me with a contrast agent to improve the visibility and do a second MRI. That's why I needed the IV.
So they told me to lay on my stomach with my arm outstretched like a Superman flying pose. 2 hours later I was done. My arm hurt so bad being locked in that position for so long. I would not want to go through that again.
Last appointment for the day was with a neurologist to go over the results. Sadly to my dismay, nothing obvious jumped out at them. It was not going to be an easy fix. So more tests are ordered for later on in the month. I hope they have a test for frustration levels because that is getting high. If I would have just had it cut off in July I would be done with this by now. Keep your calendars open for a big pity party in the near future.
Work on the cabin continues. We started to finish the walls behind the wood burning stove. I put up the mantle first of all. 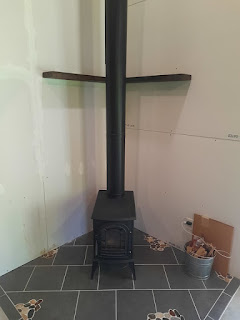 Then I cut and put up the old galvanized tin we found on Marketplace. 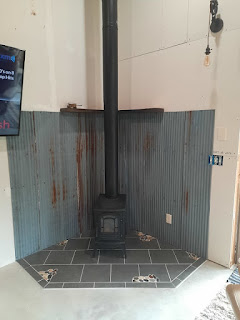 The mantle made a great place for my cannon. Then Lisa stained more wood for me, so I got busy with that. 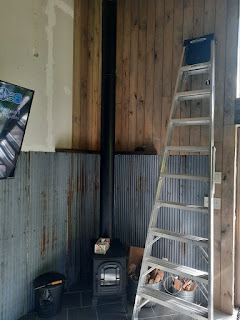 It is really taking shape now. 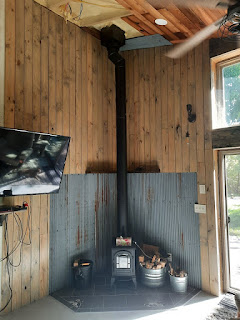 We think it really looks good. But  now as we look at it more, our mantle looks small with the wood there so we will have to go back to the drawing board on that. We have some ideas that we are kicking around.
That's it for us here. Summer has ended and now we just prepare ourselves mentally for winter and stock up on alcohol.
I hope you found this blog informative, interesting with a mix of humor for your reading enjoyment. Much better than reading a blog about two people sitting in a bear blind reading books all day.
Until the next time.
Posted by MNdrifters at 10:54 AM