A Visit by Jethro and Bambi

*Names have been changed to protect the innocent.

After we got back from our trip to the gulf coast, we felt safe in our super secret undisclosed virus free location (SSUVFL). We were getting back into our daily routine of working on the cabin and taking care of our little piece of paradise. I was out in the back forty setting up barbwire and placing landmines (That's a joke so don't call the BATF), when Gladys came running up to me. Hair disheveled, face all flush, out of breath and sweating. Between her gasping for air she was able to get these three words out.

My eyes became wide, my heart started to beat more rapidly and my hands started to shake. It was like OMG! The zombie apocalypse I have been preparing for and waiting for has finally arrived.

"What for?" said Gladys.

"Well you said they're coming. Didn't you mean the zombie hoard?"

I laughed and said "what could be worse than millions of flesh eating zombies knocking on your door?"

Nearly in tears now she blurted out "JETHRO AND BAMBI ARE ON THEIR WAY!" She then started screaming hysterically.

My eyes got even wider, my heart was ready to burst out of my chest and my body went into a shaking spasm. Not Jethro Buckhumper and Bambi Poledancer. It couldn't be, it just couldn't be. I quickly regained my composure, grabbed Gladys by the shoulders and then Will Smithed her ass. (That means I slapped her just in case you are not up to speed on current events).(Also that didn't really happen. I would never ever dare slap Gladys because she would beat me to a pulp).

I said to Gladys, "Prepare yourself. I am heading to the liquor store. I pray that I have time to get back before they arrive. How long are they staying?"

Off I went in my pickup. Tires squealing out of the driveway. I picked up 3 bottles of rum. 2 types of spiced rum and a bottle of Captain Morgan. I got a bottle of Galliano, a bottle of Banana Liqueur. three and a half cases of beer and bottles of wine. When I checked out the lady at the liquor store asked if we were throwing a party. I said that we have some people from Wisconsin coming over.

"OMG!" she said. "Do you think that will be enough alcohol?"

"Let's pray to the heavens that it is" I said. "They are only staying 2 nights."

She said a prayer for me as I struggled to wheel my over burdened shopping cart out to the truck. I made it home with a little time to spare. We got the truck unloaded and put away when we heard the neighbor's dog start barking. Gladys and I looked at each other with saucer shaped eyes. We swallowed hard and put on the best smiles we could as a 1 ton dodge with a pickup camper on it came sliding up to our house as if Bo and Luke Duke where driving it. I thought it was going to tip over. 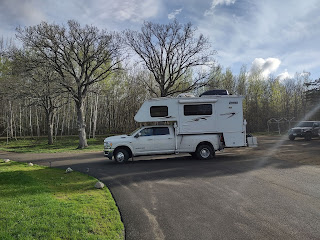 Out of the windows jumped Jethro and Bambi. Now Bambi we don't mind having here, it's just that she always has to bring that man of hers with her. 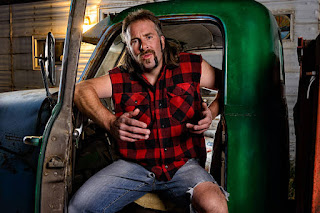 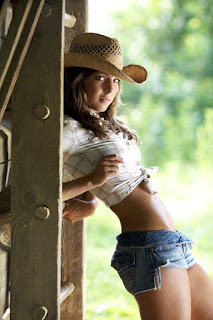 I guess you can tell by the pictures who's Jethro and who's Bambi. Jethro went to hug Gladys and spilled the beer he was carrying all over the front of her shirt while simultaneously dripping tobacco juice in her hair and on her shoulder. Bambi hugged me and I thought that I had suddenly become the pole for her next dancing routine. Don't get me wrong, I liked it, I liked it so much that I had to excuse myself and take a cold shower.

After the hugs Jethro said "Hello, long time no see. Where's the beer?"

Bambi just quietly purred as she looked at us.

That night I cooked some Ribeyes for them. I told Jethro that we were all out of squirrel at the moment. I asked Bambi if she liked her meat . She just looked at me, licked her lips and winked. Gladys made stuffed mushrooms and tater tots for the tot loving couple. After dinner Lisa made a drink called a Painkiller. With a name like that I should have had a dozen of those.

As the beer cans started to pile up we sat around and got caught up with each other's lives when a severe thunderstorm started to roll through. Tornado warnings were posted and we were not sure if we were going to have to spend the night in our storm shelter. Then the power went out. 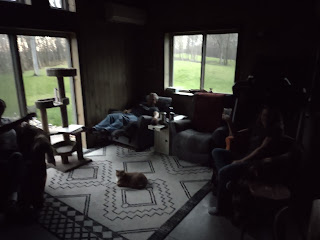 We were sitting in the dark when Jethro started to get a look of panic on his face. Was the storm really affecting him that much? How much beer has he already had? The power was out for at least an hour when he all of a sudden jumped up and in a frantic voice yelled "I have to drink more beer before it gets warm!" That's what he was worried about? Every time I looked over at Bambi in the dark, I could swear that one more button of her shirt came undone.
We made it through the storms and finally they stumbled to their camper. What are we going to do with them for a whole day tomorrow? Gladys said that she had an idea. Brewery's. Genius. We got up early the next day and cleaned up the beer cans and I found Bambi's bra behind her chair.I didn't even see her take it off.
We started the day off with some antique stores so that they could walk off the hangover. At noon we started with the first brewery. Our favorite. Outstate it is called. Next we went to another one but they were closed. Dang. Next we found a cider bar. 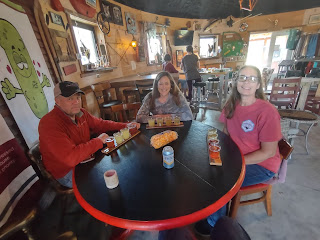 Everyone had flights except me. I had a Fresca because I was the driver. They had many different flavors and it looked like they were a hit. Bambi especially liked the pickle flavored one. She raved on and on about how she loves pickles. (No surprise there). After that we went to another brewery but they lost their brewer and were out of some beers. Next was dinner with many more beverages and then we went home. More and more beverages were consumed. I made a drink called the West Indies Yellow Bird for them to sip and enjoy. Jethro guzzled it, burped and asked for a refill. 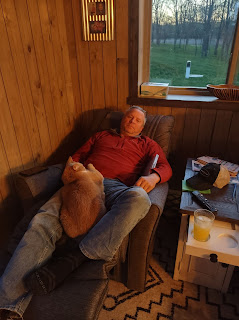 Jethro was enjoying a quiet moment with Moose. I think he was getting a second wind before the hard core drinking started again. The rest of the evening was a fog. At one point I think Bambi was teaching Gladys how to twerk but I am not sure about that.
The next morning they left our lives as fast as they came in. Leaving nothing but muddy tire tracks in our driveway. 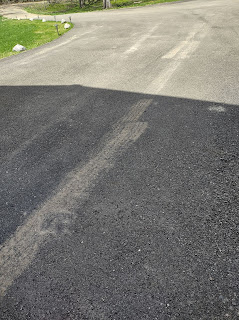 And vomit out in our trees. 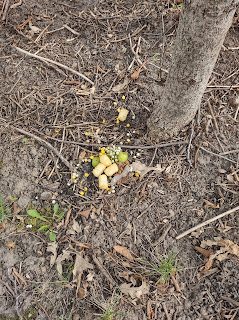 Jethro really needs to work on chewing his food. That will make good fertilizer for that tree. On a more positive note, I will have about $50 dollars in aluminium cans when I cash them in.
Safe travels to Jethro and Bambi. It was fun and as always way too short.
"Gladys! Are these your Daisy Dukes?"
Posted by MNdrifters at 6:40 AM