Flashback to the mid 1980's. America was deep into a cold war with a major super power, the Soviet Union. A young man from the plains of North Dakota hears the calling of his country and steps up to put on the uniform and help defend against the communist threat. A little nervous and apprehensive about what is going on in the world, along with the reality of being in the military mindset of it all, a ray of hope is shown to him from, of all places, Hollywood.

1986 is when I first saw the movie "Top Gun". A movie filled with adventure and patriotism when America needed it. The effects of Vietnam were still being felt and our military was carrying the brunt of it. I first saw that movie in San Jose, California. Then again in Clovis, New Mexico. It depicted our lives in the military. The hustle and bustle of working on a flight line of an active military base. The only difference being that on an aircraft carrier it is much busier due to the size of the ship versus the size of an Air Force base. I was filled with pride to be there and wouldn't trade that time for anything.

Now come back to the present. 2022. Our country is again at a low point in time as we seem to be rotting from the inside out. Division is all around us from every aspect of life it seems. Along comes the movie "Maverick". A glimmer of patriotism that most people I believe have lost. When I heard they were coming out with a sequel to Top Gun, I was skeptical. It was 36 years ago, don't do it. I'm glad they did because it was the kick in the pants this country needed or should I say, I needed. It was as good, if not better, than the original. I highly recommend seeing it. You may just go out and buy an American flag.

With the state of the economy at the moment, we have done much soul searching. We have asked ourselves some tough questions lately. The toughest being. "What does our future look like?" It amazes me how a country can do an abrupt about face and end up where we are now. Everything  has skyrocketed from gas to groceries. You can't turn on the news anymore without hearing all the bad news so we don't turn it on. It has gotten so bad that we had to take some drastic measures. Prepare yourself for what I am about to say. You may want to be sitting down for this.

Ready. Here goes. We have gotten...............(deep breath)............JOBS! It's not like OMG! It is OMG! I know right? Let me justify ourselves for a minute. With the economy tanking like it has we decided to supplement our bank accounts for what the future may hold. We hope to travel again but it is not as easy as it once was. Unless you have some deep pockets like others I know. God bless their little hearts. Lisa is working as a grounds keeper at a nursing home. It lets her be outside and she loves to do yard work. Our property looks like a park thanks to her hard work and diligence.

I, on the other hand have renewed my career as an Inventory Control Specialist (Look it up Jim. It's a thing!) I am working as a logistics associate for a national company that I cannot name due to confidentiality disclosures I have signed. It feels good to be a productive member of society again. Paying taxes and what not. Yessiree Bob! It feels good! In less than 2 years I can start collecting my retirement so maybe at that time we will retire again. That is if I haven't reached the top of the corporate ladder by then or have died. So for the time being, traveling is on hold. Hopefully they will make an electric one ton truck that will go farther than 50 miles on a charge so that we can hit the open road without feeling guilty by dumping thousands of metric tonnes of diesel exhaust on mother earth. But I am not holding my breath on that one.

A side note to this working thing. As I have suspected for quite some time now, I think I may be allergic to work. Ever since I started working, I have had a rash on my body that itches like crazy. Lisa thinks it may be a contact dermatitis caused by an allergic reaction to an outside stimulus. (Yeah, work!) Or she thinks that maybe when I was mowing brush with my shirt off I may have mowed over some poison ivy that then became airborne and I went through the cloud of poison. I think she has been watching too much science fiction when I am at work. Who knows?

What in pray tell have we been up too? Well after Jethro and Bambi's visit, I hauled a truck and trailer load of aluminum cans to be recycled. I got enough money to pay for the diesel I needed to make that trip into town. LOL.

Mainly we have been keeping ourselves busy with our Super Secret Undisclosed Virus Free Location. The SSUVFL for short. On the back part of the property we could only access it by crossing a log bridge that our neighbor made for us. I did not think it would support the weight of my John Deere with the mower attached. So luck would have it that Lisa found a piece of culvert on Market place. So I removed the bridge, sunk the culvert and filled it in with dirt and gravel. Now I have been able to get to the back and start clearing brush. The brush was so thick of prickly ash and sumac that you really couldn't walk through it. Now take a look. 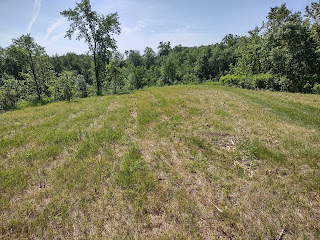 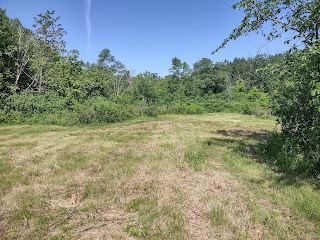 I have mowed many areas back there and it looks great. Another tedious job we wanted to tackle was sealing our asphalt driveway. First the cracks had to be filled. 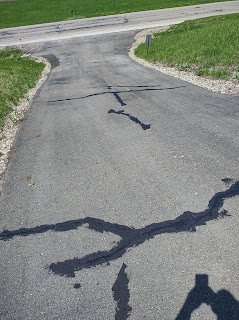 That took a couple of back breaking days to do. Then it was time to apply the sealer. Again another several day long project. 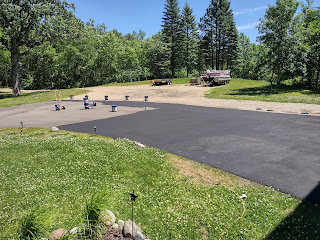 A 5 gallon bucket of sealer doesn't go as far as you think it does. I first got 5 buckets thinking that would do it. Nope. I went and got 6 more. Nope, still not enough. "I will take 6 more buckets sir." Finally I got that section done. 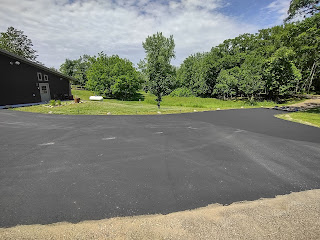 It looks as good as the day they poured it. Now I just have the front driveway down by the highway to do. I think I will wait until fall to tackle that.
On a funny note. We had tornado warnings here a couple of weeks back. When we built this place it does not have a basement. So to fix that problem we buried an underground storm shelter outside. So we went into the shelter with the cats, happy as little clams knowing we were going to survive, when all of a sudden it started to rain hard. No worries we thought. That is until the water started to flow into the air vents and our shelter started to flood. "Abandon ship, abandon ship!" Our options now were to die in a tornado or drown in a flood. We grabbed the cats and went back into the barn. 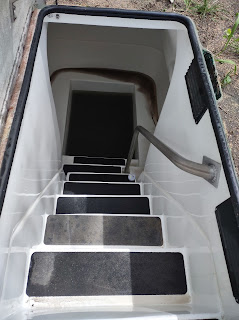 That's muddy rain water at the bottom. One more thing to fix. After that near death experience we really appreciate the smaller things in life. Like listening to the leaves dance in the wind.
Or like watching the end of life struggles of a June bug. It's not cruel. There is nothing I could do for this June bug to save it. Nothing.
The June bug did die later on. So I gathered his little body up and buried him in Lisa's garden. I then gave him a 21 gun salute with my AR-15 and played taps on my kazoo. So don't think of me as heartless.
Ramblings. Check.
Have a happy 4th of July and please remember what this holiday is about. Not what "they" want to tell you what it's about. Also be safe out there. Although if I had a choice of what finger to blow off, I know which one it would be.