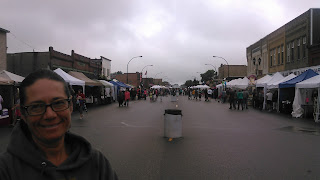 In other news. This past weekend was Potato Days here in Barnesville. They have all kinds of activities centered around the potato. Potato peeling contests. Mashed potato wrestling which sounded interesting. Although the weather was cool and rainy. I was going to enter Lisa in the Miss Tater Tot contest, but they said it was only for 10 year olds. I bet she would have won. There was a fashion show. The clothes that were on display had to be made out of potato sacks. Lots of food vendors selling potato items. Lefse, dumplings, potato soup and of course french fries. 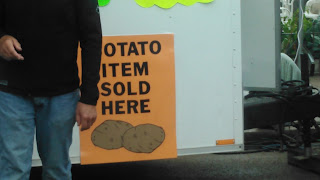 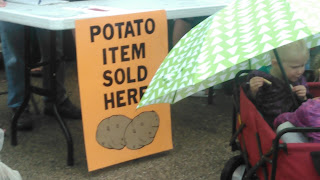 I thought it kind of funny that they had to have signs advertising the potato item.

The leaves are starting to change. It has been a very wet and cool August. Making us itchy to get going south. Someday.
Posted by MNdrifters at 10:37 AM